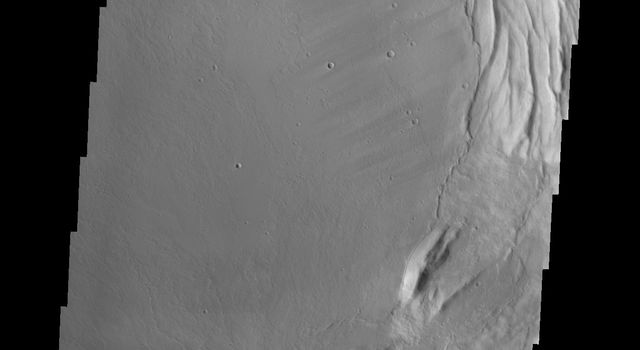 On Aug. 27, 2017, the Multi-angle Imaging SpectroRadiometer (MISR) instrument on NASA's Terra satellite passed over then-Tropical Storm Harvey about noon local time, the day after the storm first made landfall in Texas as a Category 4 hurricane. The MISR instrument is equipped with nine cameras that observe Earth at different angles over a time period of seven minutes. Geometric information from the multiple camera views is used to compute the cloud top heights, and motion of the clouds during the image sequence is used to calculate wind speed. This composite image shows the storm as viewed by the central, downward-looking camera (left), as well as the cloud top heights in kilometers (center) and the wind speeds (right) superimposed on the image. The length of the arrows is proportional to the wind speed, while their color shows the altitude at which the winds were calculated. Also included is an animation made by combining all nine images from the MISR cameras, showing the motion of the storm during the seven-minute period.

At this time, the center of the tropical storm was located just northwest of the city of Victoria and maximum wind speeds on the ground were around 40 miles per hour (65 kilometers per hour) according to the National Oceanic and Atmospheric Administration (NOAA), which matches well with the near-surface winds calculated by MISR to the west of Corpus Christi. In the 36 hours or so since it had made landfall, Harvey had weakened considerably -- these images show that the eye had disappeared and much of the circular motion of storm had dissipated, as shown by the calculated wind directions. However, the area of very high clouds and strong winds near Houston shows that the storm was continuing to produce powerful rain bands. At this point, hydrographs managed by NOAA in downtown Houston were already recording flood stage at both the Buffalo Bayou (28 feet or 8.5 meters as of 12:15 p.m. CDT August 27) and the White Oak Bayou (40 feet or 12 meters at last record that morning). The MISR data show the storm clouds reaching an altitude of about 10 miles (16 kilometers).

These data were captured during Terra orbit 94108. MISR data are available through the NASA Langley Research Center; for more information, go to https://eosweb.larc.nasa.gov/project/misr/misr_table. MISR was built and is managed by NASA's Jet Propulsion Laboratory in Pasadena, California, for NASA's Science Mission Directorate in Washington, D.C. The Terra spacecraft is managed by NASA's Goddard Space Flight Center in Greenbelt, Maryland. The MISR data were obtained from the NASA Langley Research Center Atmospheric Science Data Center in Hampton, Virginia. JPL is a division of Caltech in Pasadena.