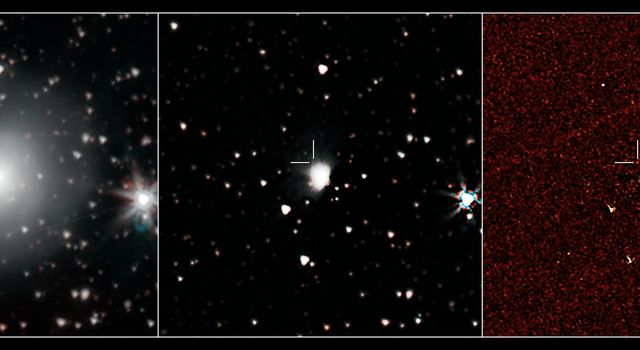 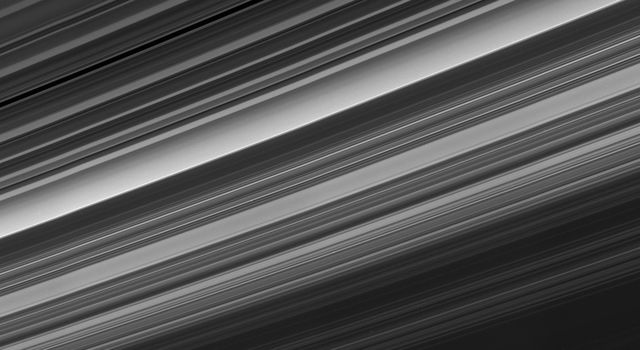 Inside-Out Rings: View From Beneath

On Sept. 14, 2017, one day before making its final plunge into Saturn's atmosphere, NASA's Cassini spacecraft used its Ultraviolet Imaging Spectrograph, or UVIS, instrument to capture this final view of ultraviolet auroral emissions in the planet's north polar region.

The view is centered on the north pole of Saturn, with lines of latitude visible for 80, 70 and 60 degrees. Lines of longitude are spaced 40 degrees apart. The planet's day side is at bottom, while the night side is at top. A sequence of images from this observation has also been assembled into a movie sequence. The last image in the movie was taken about an hour before the still image, which was the actual final UVIS auroral image.

Auroral emissions are generated by charged particles traveling along the invisible lines of Saturn's magnetic field. These particles precipitate into the atmosphere, releasing light when they strike gas molecules there.

Several individual auroral structures are visible here, despite that this UVIS view was acquired at a fairly large distance from the planet (about 424,000 miles or 683,000 kilometers). Each of these features is connected to a particular phenomenon in Saturn's magnetosphere. For instance, it is possible to identify auroral signatures here that are related to the injection of hot plasma from the dayside magnetosphere, as well as auroral features associated with a change in the magnetic field's shape on the magnetosphere's night side.

Several possible scenarios have been postulated over the years to explain Saturn's changing auroral emissions, but researchers are still far from a complete understanding of this complicated puzzle. Researchers will continue to analyze the hundreds of image sequences UVIS obtained of Saturn's auroras during Cassini's 13-year mission, with many new discoveries likely to be made.

This image and movie sequence were produced by the Laboratory for Planetary and Atmospheric Physics (LPAP) of the STAR Institute of the University of Liege in Belgium, in collaboration with the UVIS Team.

The Cassini mission is a cooperative project of NASA, ESA (the European Space Agency) and the Italian Space Agency. The Jet Propulsion Laboratory, a division of Caltech in Pasadena, manages the mission for NASA's Science Mission Directorate, Washington. The Cassini orbiter and its two onboard cameras were designed, developed and assembled at JPL. The ultraviolet imaging spectrograph was designed and built at, and the team is based at the University of Colorado, Boulder.