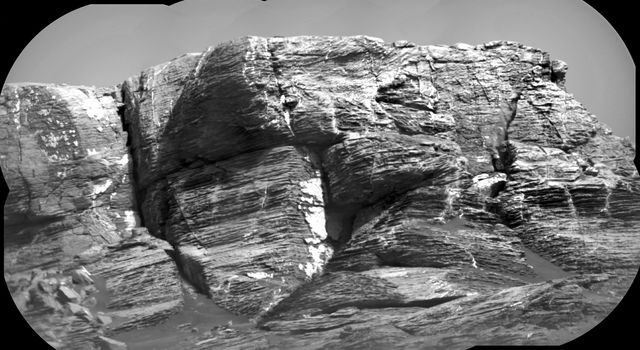 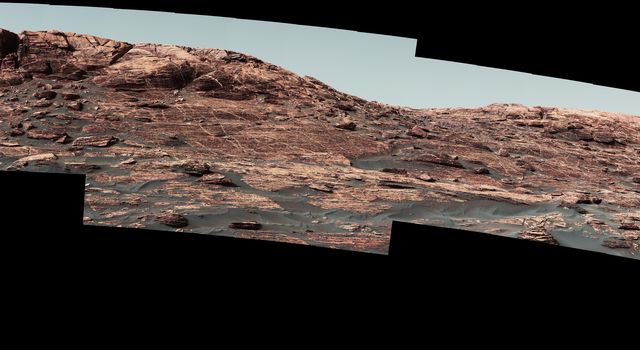 Martian Ridge Looming Above Curiosity Prior to Ascent

This and other Mastcam panoramas show details of the sedimentary rocks that make up the "Vera Rubin Ridge." This distinct topographic feature located on the lower slopes of Mount Sharp (Aeolis Mons) is characterized by the presence of hematite, an iron-oxide mineral, which has been detected from orbit. The Mastcam images show that the rocks making up the lower part of the ridge are characterized by distinct horizontal stratification with individual rock layers of the order of several inches (tens of centimeters) thick. Scientists on the mission are using such images to determine the ancient environment these rocks were deposited in. The repeated beds indicate progressive accumulation of sediments that now make up the lower part of Mount Sharp, although from this distance it is not possible to know if they were formed by aqueous or wind-blown processes. Close-up images collected as the rover climbs the ridge will help answer this question. The stratified rocks are cross cut by veins filled with a white mineral, likely calcium sulfate, that provide evidence of later episodes of fluid flow through the rocks.

The panorama has been white-balanced so that the colors of the rock materials resemble how they would appear under daytime lighting conditions on Earth. It spans about 55 compass degrees centered to the south-southeast. The Sol 1790 location just north of the ridge is shown in a Sol 1789 traverse map.

The ridge was informally named in early 2017 in memory of Vera Cooper Rubin (1928-2016), whose astronomical observations provided evidence for the existence of the universe's dark matter.

Figure 1 is an annotated version of the scene. On it, two scale bars of 2 meters (6.6 feet) provide size information for features near the bottom of the ridge and at the highest point visible.