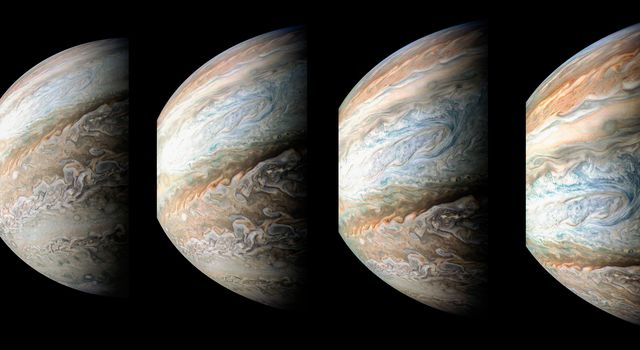 Re-analysis of 2002-2009 data from a hydrogen-finding instrument on NASA's Mars Odyssey orbiter increased the resolution of maps of hydrogen abundance. The reprocessed data (lower map) shows more "water-equivalent hydrogen" (darker blue) in some parts of this equatorial region of Mars. Puzzingly, this suggests the possible presence of water ice just beneath the surface near the equator, though it would not be thermodynamically stable there.

The upper map uses raw data from Odyssey's neutron spectrometer instrument, which senses the energy state of neutrons coming from Mars, providing an indication of how much hydrogen is present in the top 3 feet (1 meter) of the surface. Hydrogen detected by Odyssey at high latitudes of Mars in 2002 was confirmed to be in the form of water ice by the follow-up NASA Phoenix Mars Lander mission in 2008.

A 2017 reprocessing of the older data applied image-reconstruction techniques often used to reduce blurring from medical imaging data. The results are shown here for an area straddling the equator for about one-fourth the circumference of the planet, centered at 175 degrees west longitude. The white contours outline lobes of a formation called Medusae Fossae, coinciding with some areas of higher hydrogen abundance in the enhanced-resolution analysis. The black line indicates the limit of a relatively young lava plain, coinciding with areas of lower hydrogen abundance in the enhanced-resolution analysis.

The color-coding key for hydrogen abundance in both maps is indicated by the horizontal bar, in units expressed as how much water would be present in the ground if the hydrogen is all in the form of water. Units of the equivalent water weight, as a percentage of the material in the ground, are correlated with counts recorded by the spectrometer, ranging from less than 1 weight-percent water equivalent (red) to more than 30 percent (dark blue).