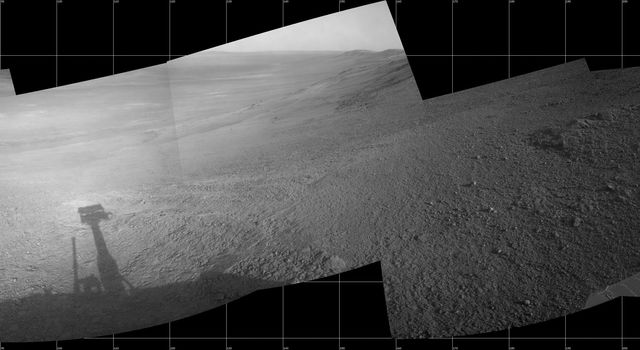 View Down 'Perseverance Valley' After Entry at Top 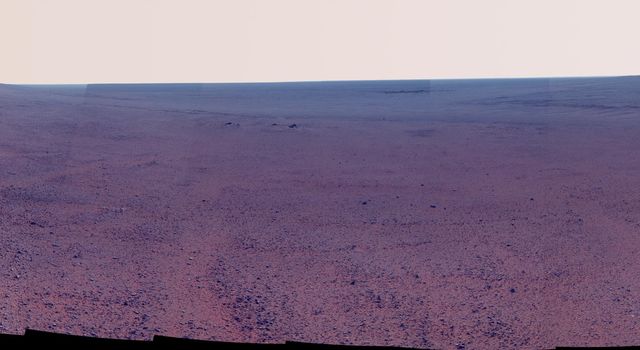 Toward the right side of this scene is a broad notch in the crest of the western rim of Endeavour Crater. Wheel tracks in that area were left by NASA's Mars Exploration Rover Opportunity as it observed "Perseverance Valley" from above in the spring of 2017. The valley is a major destination for the rover's extended mission. It descends out of sight on the inner slope of the rim, extending down and eastward from that notch.

Opportunity's panoramic camera (Pancam) took the component images for this view from a position outside the crater during the span of June 7 to June 19, 2017, sols 4753 to 4765 of the rover's work on Mars.

This scene includes features that may have been ancient channels from water, ice or wind moving toward the notch in the rim, which might have been a spillway. Perseverance Valley, just on the other side, was likely carved by action of some fluid, such as water, water-lubricated debris, or wind. The mission is investigating to learn more about that process from evidence in place.

The panorama spans about three-fourths of a full-circle view, from southeastward on the left, through westward in the middle, to northeastward on the right. High points visible on the rim of Endeavour Crater include "Winnemucca" on the left and "Cape Tribulation" on the right. Winnemucca is part of the "Cape Byron" portion of the crater rim. The horizon at far right extends across the floor of Endeavour Crater, which is about 14 miles (22 kilometers) in diameter. Opportunity has been investigating sites on and near the western rim of Endeavour since 2011, following seven years of exploring smaller craters after its 2004 landing. Images showing more of the crater's rim, for context, are at PIA21496, PIA21490 and PIA17758.

This view merges exposures taken through three of the Pancam's color filters, centered on wavelengths of 753 nanometers (near-infrared), 535 nanometers (green) and 432 nanometers (violet). Color is enhanced in this version to make differences in surface materials more easily visible.

The rover team calls this the "Sprained Ankle" panorama because the images were collected during a driving moratorium while engineers diagnosed a temporary steering stall with one front wheel pointed outward more than 30 degrees. The team was able to straighten the wheel to point straight ahead, and then resumed driving.

The location from which this scene was recorded is labeled as "Sol 4752" on a later traverse map. Opportunity subsequently entered the upper end of Perseverance Valley and returned views looking down the valley and back up toward the rim crest from the location it reached on July 7 (Sol 4782).

Photojournal Note: Also available is the full resolution TIFF file PIA21723_full.tif. This file may be too large to view from a browser; it can be downloaded onto your desktop by right-clicking on the previous link and viewed with image viewing software.