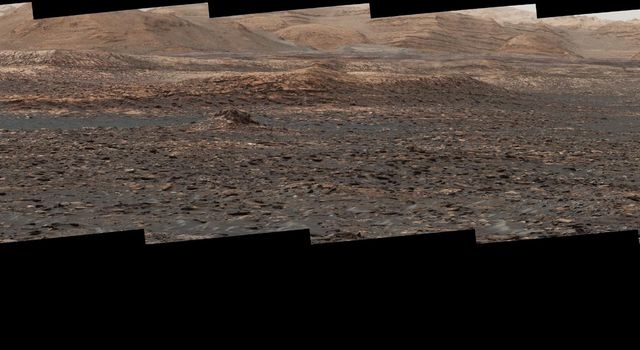 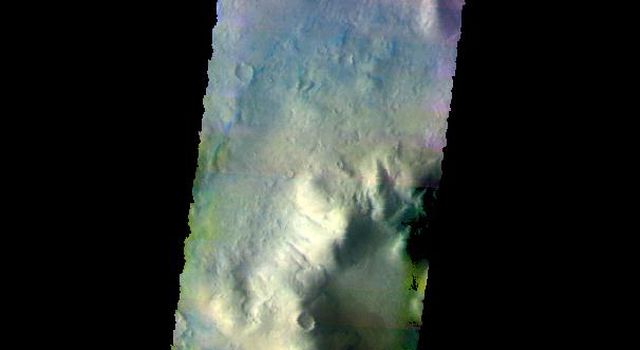 This look ahead from NASA's Curiosity Mars rover includes four geological layers to be examined by the mission, and higher reaches of Mount Sharp beyond the planned study area.

The redder rocks of the foreground are part of the Murray formation. Pale gray rocks in the middle distance of the right half of the image are in the Clay Unit. A band between those terrains is "Vera Rubin Ridge." Rounded brown knobs beyond the Clay Unit are in the Sulfate Unit, beyond which lie higher portions of the mountain.

The view combines six images taken with the rover's Mast Camera (Mastcam) on Jan. 24, 2017, during the 1,589th Martian day, or sol, of Curiosity's work on Mars, when the rover was still more than half a mile (about a kilometer) north of Vera Rubin Ridge. The panorama has been white-balanced so that the colors of the rock and sand materials resemble how they would appear under daytime lighting conditions on Earth. It spans from east-southeast on the left to south on the right. The Sol 1589 location was just north of the waypoint labeled "Ogunquit Beach" on a map of the area that also shows locations of the Murray formation, Vera Rubin Ridge, Clay Unit and Sulfate Unit.

The ridge was informally named in early 2017 in memory of Vera Cooper Rubin (1928-2016), whose astronomical observations provided evidence for the existence of the universe's dark matter.

Figure 1 is an annotated version of the scene. On it, the dotted white line traces the top of the ridge, a red dot indicates the anticipated route to the top of the ridge, and scale bars indicate dimensions at different distances from the rover. The nearest scale bar, in centimeters, refers to ground about 90 feet (27 meters) away from the camera, in the Murray formation outcrop. The middle and farthest scale bars, in meters, refer to features at distances of about 1,000 yards (900 meters) on Vera Rubin Ridge and about 2.1 miles (3.4 kilometers) in the Sulfate Unit.

Photojournal Note: Also available is the full resolution TIFF file for Figure 1 PIA21716_fig1_anno.tif. This file may be too large to view from a browser; it can be downloaded onto your desktop by right-clicking on the previous link and viewed with image viewing software.