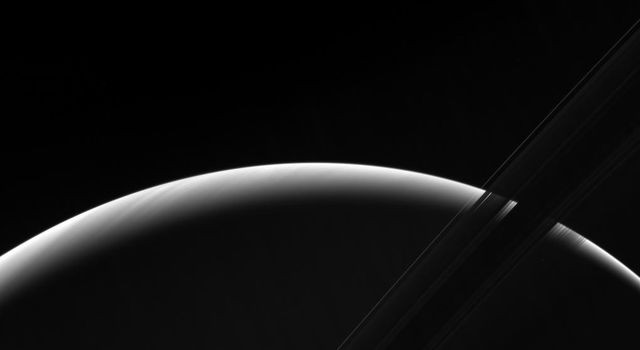 NASA's Mars Exploration Rover Opportunity took the component images of this enhanced-color scene during the mission's "walkabout" survey of an area just above the top of "Perseverance Valley," in preparation for driving down the valley.

The location is just outside the crest line of the western rim of Endeavour Crater, looking toward the northwest. The rim crest at the top of Perseverance Valley is off the scene to the right. A swath across the top half of the image is lined with dark rocks, especially on the far side. The swath runs east-west, and one possible history under investigation is that it was a channel into a lake perched against the edge of the crater billions of years ago. Another hypothesis is that the linear pattern of the rock piles is related to radial fractures from the impact that excavated Endeavour Crater. One goal of the walkabout is to determine whether a close look at the rocks will provide clues to the history of the site.

For scale, the width of the swath near the center of the image is roughly 30 feet (9 meters).

Opportunity's panoramic camera (Pancam) recorded this scene on June 3, 2017, during the 4,749th Martian day, or sol, of the rover's work on Mars. The enhanced color helps make differences in surface materials visible. The view merges exposures taken through three of the Pancam's color filters, centered on wavelengths of 753 nanometers (near-infrared), 535 nanometers (green) and 432 nanometers (violet).

Opportunity and the next-generation Mars rover, Curiosity, plus three active NASA Mars orbiters are part of ambitious robotic exploration to understand Mars, which will continue with NASA missions to be launched in 2018 and 2020. The robotic missions help lead the way for sending humans to Mars in the 2030s. JPL, a division of Caltech in Pasadena, built Opportunity and manages the mission for NASA's Science Mission Directorate, Washington.