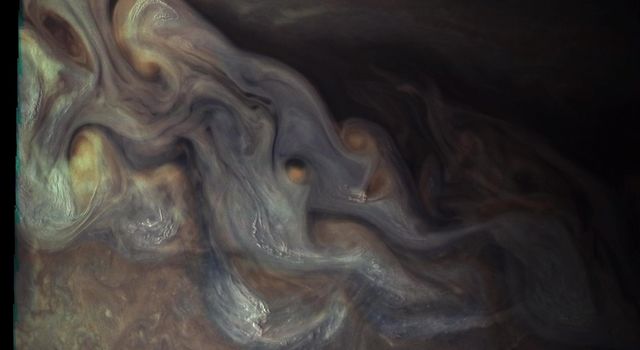 Small bright clouds dot Jupiter's entire south tropical zone in this image acquired by JunoCam on NASA's Juno spacecraft on May 19, 2017, at an altitude of 7,990 miles (12,858 kilometers). Although the bright clouds appear tiny in this vast Jovian cloudscape, they actually are cloud towers roughly 30 miles (50 kilometers) wide and 30 miles (50 kilometers) high that cast shadows on the clouds below. On Jupiter, clouds this high are almost certainly composed of water and/or ammonia ice, and they may be sources of lightning. This is the first time so many cloud towers have been visible, possibly because the late-afternoon lighting is particularly good at this geometry.