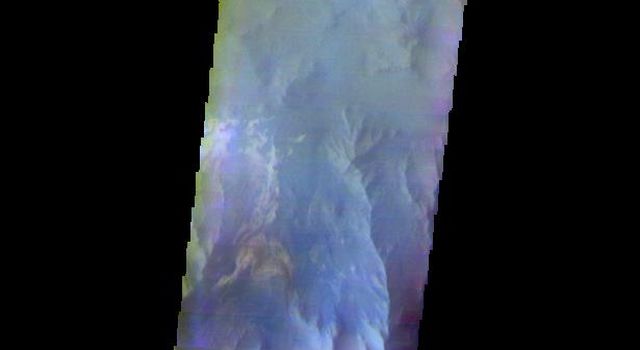 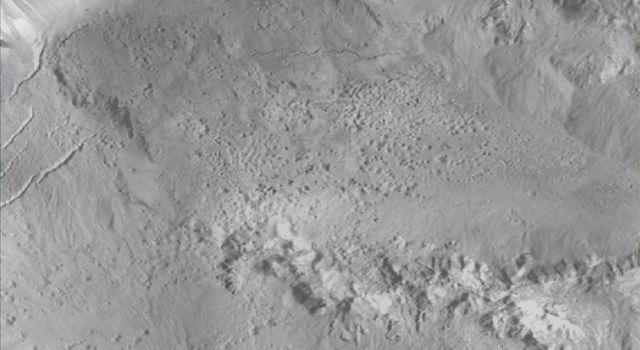 Click on the image for larger animation
Captioned video

Cassini gazed toward high southern latitudes near Saturn's south pole to observe ghostly curtains of dancing light -- Saturn's southern auroras, or southern lights. These natural light displays at the planet's poles are created by charged particles raining down into the upper atmosphere, making gases there glow.

The dark area at the top of this scene is Saturn's night side. The auroras rotate from left to right, curving around the planet as Saturn rotates over about 70 minutes, compressed here into a movie sequence of about five seconds.

Background stars are seen sliding behind the planet. Cassini was moving around Saturn during the observation, keeping its gaze fixed on a particular spot on the planet, which causes a shift in the distant background over the course of the observation.

Some of the stars seem to make a slight turn to the right just before disappearing. This effect is due to refraction -- the starlight gets bent as it passes through the atmosphere, which acts as a lens.

Random bright specks and streaks appearing from frame to frame are due to charged particles and cosmic rays hitting the camera detector.

For other examples of the auroras seen by Cassini earlier in the mission, see PIA13402 and PIA11681.

The aim of this observation was to observe seasonal changes in the brightness of Saturn's auroras, and to compare with the simultaneous observations made by Cassini's infrared and ultraviolet imaging spectrometers.

The original images in this movie sequence have a size of 256x256 pixels; both the original size and a version enlarged to 500x500 pixels are available here. The small image size is the result of a setting on the camera that allows for shorter exposure times than full-size (1024x1024 pixel) images. This enabled Cassini to take more frames in a short time and still capture enough photons from the auroras for them to be visible.

The images were taken in visible light using the Cassini spacecraft narrow-angle camera on July 20, 2017, at a distance of about 620,000 miles (1 million kilometers) from Saturn. The views look toward 74 degrees south latitude on Saturn. Image scale is about 0.9 mile (1.4 kilometers) per pixel on Saturn.