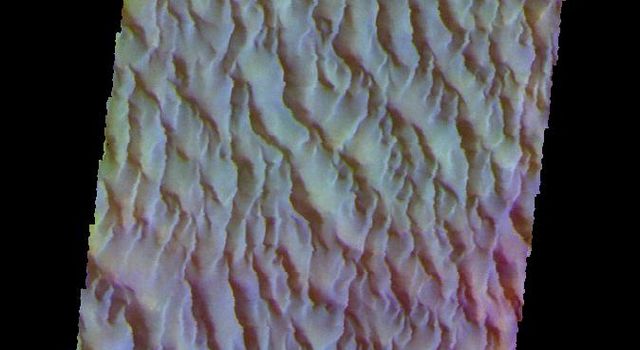 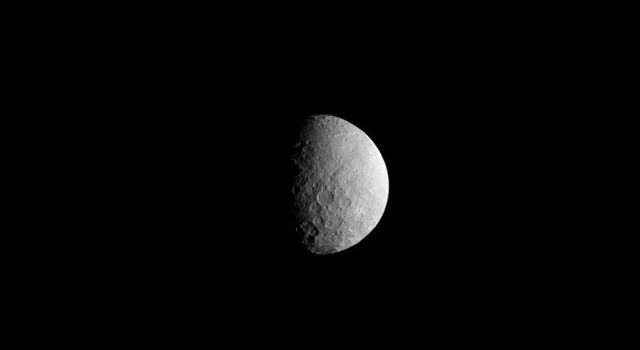 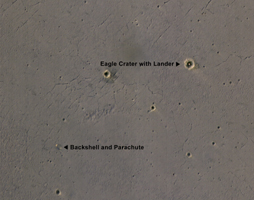 The bright landing platform left behind by NASA's Mars Exploration Rover Opportunity in 2004 is visible inside Eagle Crater, at upper right in this April 8, 2017, observation by NASA's Mars Reconnaissance Orbiter.

Mars Reconnaissance Orbiter arrived at Mars in March 2006, more than two years after Opportunity's landing on Jan. 25, 2004, Universal Time (Jan. 24, PDT). This is the first image of Eagle Crater from the orbiter's High Resolution Imaging Science Experiment (HiRISE) camera, which has optics that include the most powerful telescope ever sent to Mars.

Eagle Crater is about 72 feet (22 meters) in diameter, at 1.95 degrees south latitude, 354.47 degrees east longitude, in the Meridiani Planum region of Mars. The airbag-cushioned lander, with Opportunity folded-up inside, first hit Martian ground near the crater, then bounced and rolled right into the crater. The lander structure was four triangles, folded into a tetrahedron until after the airbags deflated. The triangular petals then opened, exposing the rover. A week later, the rover drove off (see PIA05214), and the landing platform's job was done.

The spacecraft's backshell and parachute, jettisoned during final descent, are visible near the lower left corner of this scene. The blue tint of the backshell is an effect of exaggerated color, because HiRISE combines color information from red, blue-green and infrared portions of the spectrum, rather than three different visible-light colors, so its color images are not true color.

Figure 1 is an annotated version covering a broader area from the same HiRISE observation, ESP_050177_1780.

Opportunity examined Eagle Crater for more than half of the rover's originally planned three-month mission, before driving east and south to larger craters. At Eagle, it found headline-making evidence that water once flowed over the surface and soaked the subsurface of the area. By the time this orbital image of the landing site was taken, about 13 years after the rover departed Eagle, Opportunity had driven more than 27 miles (44 kilometers) and was actively exploring the rim of Endeavour Crater, which is about 1,000 times as wide as Eagle.

Before leaving its lander platform out of sight, Opportunity took a memorable look-back image of Eagle Crater, online at PIA05755 .