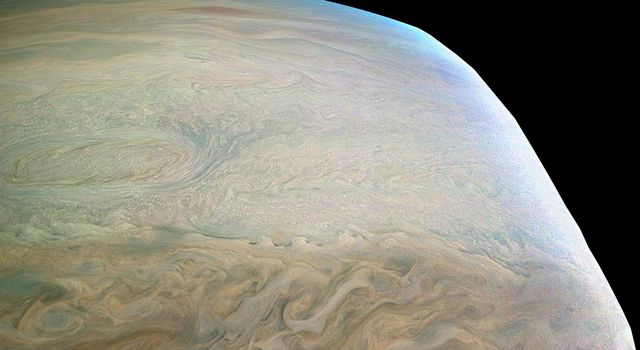 The Edge of Jupiter 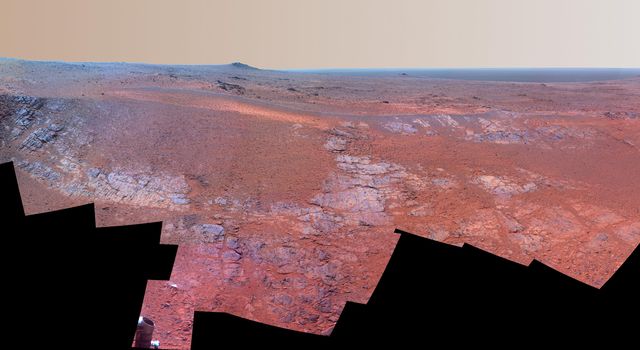 A ridge called "Rocheport" on the western rim of Mars' Endeavour Crater spans this mosaic of images from the panoramic camera (Pancam) on NASA's Mars Exploration Rover Opportunity.

The view extends from south-southeast on the left to north on the right. Rocheport is near the southern end of an Endeavour rim segment called "Cape Tribulation." The Pancam took the component images for this panorama on Feb. 25, 2017, during the 4,654th Martian day, or sol, of Opportunity's work on Mars. Opportunity began exploring the western rim of Endeavour Crater in 2011 and reached the north end of Cape Tribulation in 2014.

This ridge bears some grooves on its side, such as between the two dark shoulders angling down near the left edge of the scene. For scale, those shoulders are about 10 to 16 feet (3 to 5 meters) long. The grooves might have been carved long ago by water or ice or wind.

The view merges exposures taken through three of the Pancam's color filters, centered on wavelengths of 753 nanometers (near-infrared), 535 nanometers (green) and 432 nanometers (violet). It is presented in approximately true color.

The Rocheport name comes from a riverbank town in Missouri along the route of Lewis and Clark's "Corps of Discovery" Expedition.

Photojournal Note: Also available is the full resolution TIFF file PIA21943_full.tif. This file may be too large to view from a browser; it can be downloaded onto your desktop by right-clicking on the previous link and viewed with image viewing software.