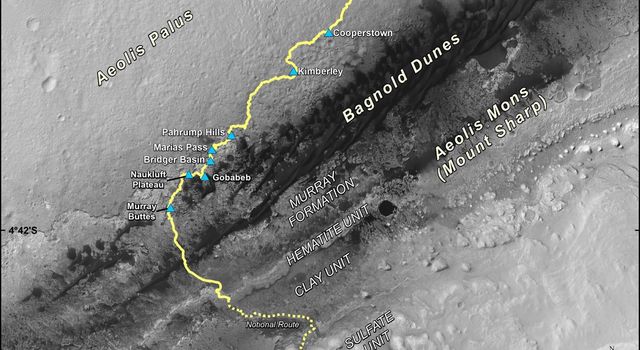 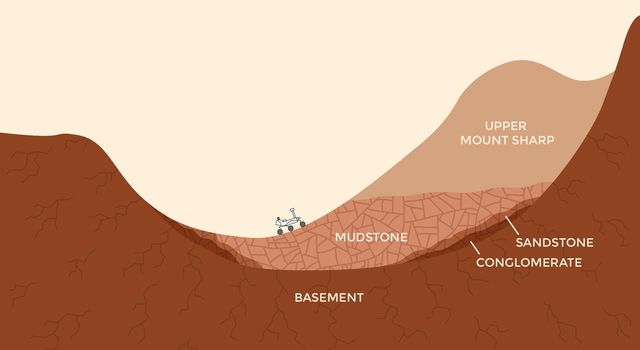 Now and Long Ago at Gale Crater, Mars (Illustration)

The foreground of this scene from the Mast Camera (Mastcam) on NASA's Curiosity Mars rover shows purple-hued rocks near the rover's late-2016 location on lower Mount Sharp. The scene's middle distance includes higher layers that are future destinations for the mission.

Variations in color of the rocks hint at the diversity of their composition on lower Mount Sharp. The purple tone of the foreground rocks has been seen in other rocks where Curiosity's Chemical and Mineralogy (CheMin) instrument has detected hematite. Winds and windblown sand in this part of Curiosity's traverse and in this season tend to keep rocks relatively free of dust, which otherwise can cloak rocks' color.

The three frames combined into this mosaic were acquired by the Mastcam's right-eye camera on Nov. 10, 2016, during the 1,516th Martian day, or sol, of Curiosity's work on Mars. The scene is presented with a color adjustment that approximates white balancing, to resemble how the rocks and sand would appear under daytime lighting conditions on Earth. Sunlight on Mars is tinged by the dusty atmosphere and this adjustment helps geologists recognize color patterns they are familiar with on Earth.

The view spans about 15 compass degrees, with the left edge toward southeast. The rover's planned direction of travel from its location when this scene was recorded is generally southeastward.

The orange-looking rocks just above the purplish foreground ones are in the upper portion of the Murray formation, which is the basal section of Mount Sharp, extending up to a ridge-forming layer called the Hematite Unit. Beyond that is the Clay Unit, which is relatively flat and hard to see from this viewpoint. The next rounded hills are the Sulfate Unit, Curiosity's highest planned destination. The most distant slopes in the scene are higher levels of Mount Sharp, beyond where Curiosity will drive.

Figure 1 is a version of the same scene with annotations added as reference points for distance, size and relative elevation. The annotations are triangles with text telling the distance (in kilometers) to the point in the image marked by the triangle, the point's elevation (in meters) relative to the rover's location, and the size (in meters) of an object as big as the triangle at that distance.