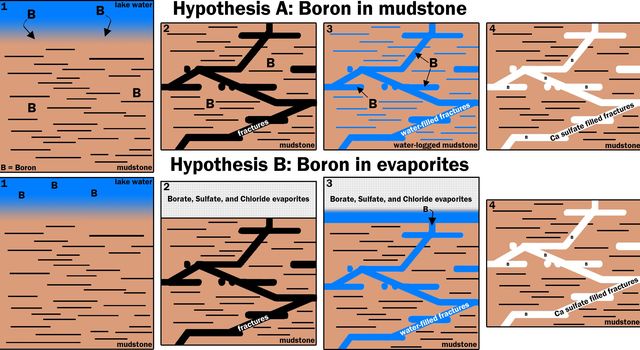 Two Possible Ways Boron Got into Veins on Mount Sharp

At left, an image from Curiosity's Mast Camera (Mastcam) shows the context of the pale vein in mudstone of the Murray formation on lower Mount Sharp. A red outline marks the area included in a magnified view, at right, from ChemCam's remote micro-imager. The magnified view is annotated with indicators of boron, sodium and chlorine content detected by ChemCam at individual points hit with the instrument's laser.

Targets such as Diyogha indicate that the calcium sulfate veins in the Murray bedrock may have a source that is rich in evaporite minerals. Boron, chlorine and sodium all can be present in evaporites. Diyogha was examined on Sept. 7, 2016, during the 1,454th Martian day, or sol, of Curiosity's work on Mars.

The scale bar for the inset is 10.4 millimeters, or about 0.41 inch. The ChemCam image is enhanced with color information from Mastcam. The vein is whiter in the middle due to the dust being blown away by impact of the laser. Point 2 hits a pebble and not the sulfate vein, so its chemistry is not included on the figure.