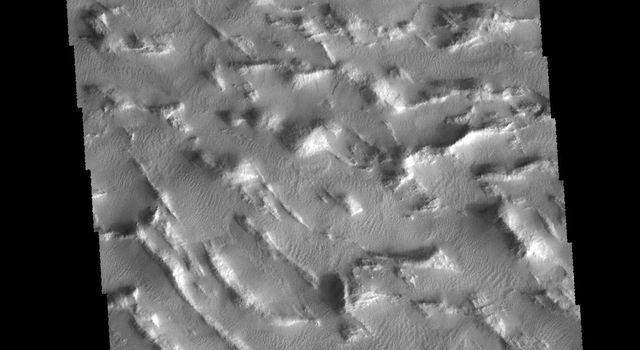 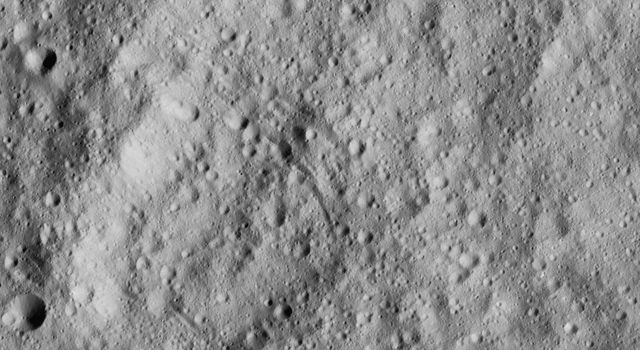 These cutouts from the observation cover three locations where parts of the spacecraft reached the ground: the lander module itself in the upper portion, the parachute and back shell at lower left, and the heat shield at lower right. The heat shield location was outside of the area covered in color. The scale bar of 10 meters (32.8 feet) applies to all three cutouts.

Schiaparelli was one component of the European Space Agency's ExoMars 2016 project, which placed the Trace Gas Orbiter into orbit around Mars on the same arrival date. The ExoMars project received data from Schiaparelli during its descent through the atmosphere. ESA reports that the heat shield separated as planned, the parachute deployed as planned but was released (with back shell) prematurely, and the lander hit the ground at a velocity of more than 180 miles per hour (more than 300 kilometers per hour).

Information gained from the Nov. 1 observation supplements what was learned from an Oct. 25 HiRISE observation, at PIA21131, which also shows the locations of these three cutouts relative to each other.

Where the lander module struck the ground, dark radial patterns that extend from a dark spot are interpreted as "ejecta," or material thrown outward from the impact, which may have excavated a shallow crater. From the earlier image, it was not clear whether the relatively bright pixels and clusters of pixels scattered around the lander module's impact site are fragments of the module or image noise. Now it is clear that at least the four brightest spots near the impact are not noise. These bright spots are in the same location in the two images and have a white color, unusual for this region of Mars. The module may have broken up at impact, and some fragments might have been thrown outward like impact ejecta.

The parachute has a different shape in the Nov. 1 image than in the Oct. 25 one, apparently from shifting in the wind. Similar shifting was observed in the parachute of NASA's Mars Science Laboratory mission during the first six months after the Mars arrival of that mission's Curiosity rover in 2012 [PIA16813].

At lower right are several bright features surrounded by dark radial impact patterns, located where the heat shield was expected to impact. The bright spots appear identical in the Nov. 1 and Oct. 25 images, which were taken from different angles, so these spots are now interpreted as bright material, such as insulation layers, not glinting reflections.