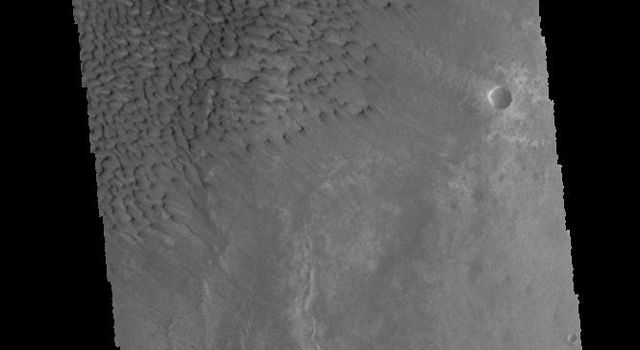 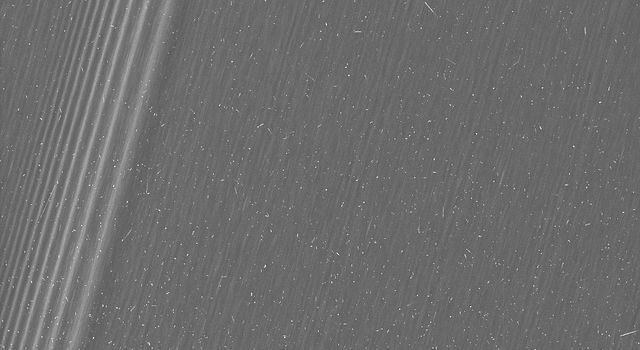 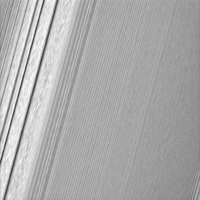 This Cassini image features a density wave in Saturn's A ring (at left) that lies around 134,500 km from Saturn. Density waves are accumulations of particles at certain distances from the planet. This feature is filled with clumpy perturbations, which researchers informally refer to as "straw." The wave itself is created by the gravity of the moons Janus and Epimetheus, which share the same orbit around Saturn. Elsewhere, the scene is dominated by "wakes" from a recent pass of the ring moon Pan.

Two versions of this image are available. This is a lightly processed version, with minimal enhancement, preserving all original details present in the image. The other version (Figure 1) has been processed to remove the small bright blemishes caused by cosmic rays and charged particle radiation near the planet -- a more aesthetically pleasing image, but with a slight softening of the finest details.

The image was taken in visible light with the Cassini spacecraft wide-angle camera on Dec. 18, 2016. The view was obtained at a distance of approximately 34,000 miles (56,000 kilometers) from the rings and looks toward the unilluminated side of the rings. Image scale is about a quarter-mile (340 meters) per pixel.