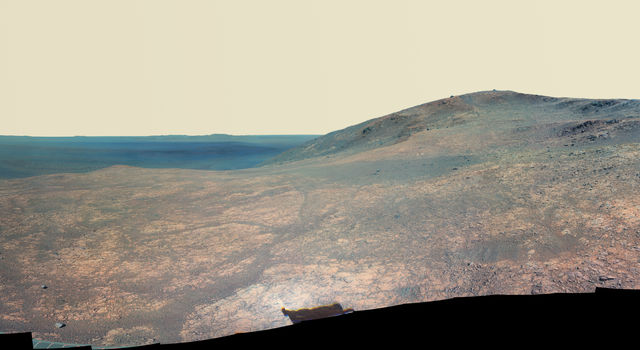 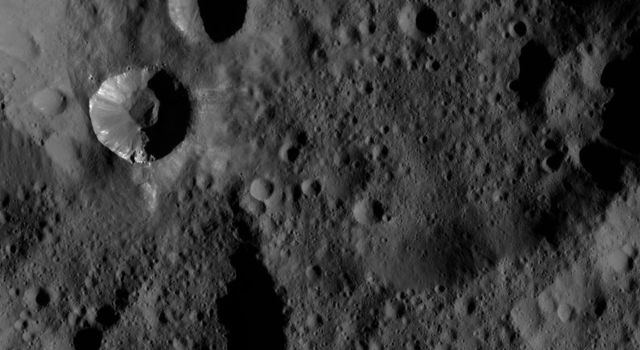 "Marathon Valley" on Mars opens northeastward to a view across the floor of Endeavour Crater in this scene from the panoramic camera (Pancam) of NASA's Mars Exploration Rover Opportunity.

The scene merges multiple Pancam exposures taken during the period April 16 through May 15, 2016, corresponding to sols (Martian days) 4,347 through 4,375 of Opportunity's work on Mars. It spans from north, at the left, to west-southwest, at the right.

The high point in the right half of the scene is "Knudsen Ridge," which forms part of the southern edge of Marathon Valley. Portions of the northeastern and eastern rim of Endeavour crater appear on the distant horizon. Endeavour Crater is 14 miles (22 kilometers) in diameter. The fractured texture of Marathon Valley's floor is visible in the foreground.

The view merges exposures taken through three of the Pancam's color filters, centered on wavelengths of 753 nanometers (near-infrared), 535 nanometers (green) and 432 nanometers (violet). It is presented in approximately true color.

The rover team calls this image the mission's "Sacagawea Panorama," for the Lemhi Shoshone woman, also commemorated on U.S. dollar coins, whose assistance to the Lewis and Clark expedition helped enable its successes in 1804-1806. Many rocks and other features in Marathon Valley were informally named for members of Lewis and Clark's "Corps of Discovery" expedition.

Opportunity entered Marathon Valley in July 2015. The valley's informal name was chosen because Opportunity's arrival at this point along the western rim of Endeavour Crater coincided closely with the rover surpassing marathon-footrace distance in its total driving odometry since landing on Mars in January 2004. The team's planned investigations in the valley were nearing completion when the component images for this scene were taken.

Photojournal Note: Also available is the full resolution TIFF file PIA20749_full.tif. This file may be too large to view from a browser; it can be downloaded onto your desktop by right-clicking on the previous link and viewed with image viewing software.