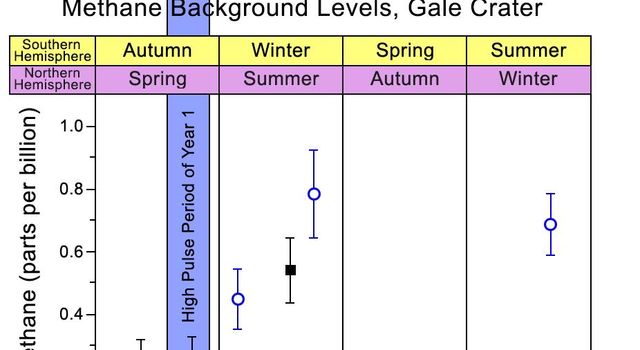 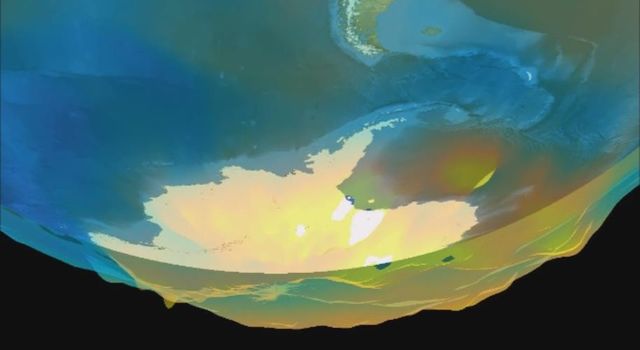 By monitoring weather throughout two Martian years since landing in Gale Crater in 2012, NASA's Curiosity Mars rover has documented seasonal patterns such as shown in these graphs of temperature, water-vapor content and air pressure.

Each Martian year lasts nearly two Earth years because a planet farther from the sun takes longer to complete each orbit around the sun. Mars has a tilt similar to Earth's, which contributes to having summer, fall, winter and spring seasons. Mars has the additional factor of a more elliptical orbit than Earth's, putting Mars farther from the sun during southern-hemisphere winter than it is during southern-hemisphere summer. This results in a longer and colder southern fall and winter than if the orbit were circular. Gale Crater is in the southern hemisphere, though close to the Martian equator.

The top chart of this three-part infographic compares temperatures at Mars' Gale Crater (lower set of bars) to temperatures in Los Angeles. It shows key differences both in how much colder the Martian site is throughout the year, and also how much greater the difference is between daily highs and lows on Mars. Mars has only about one one-hundredth as much atmosphere as Earth. Without much of an atmospheric blanket, the air temperature around Curiosity usually plummets by more than 100 Fahrenheit degrees (55 Celsius degrees) between the afternoon high and the overnight low.

Each bar on the temperature chart represents an average over one-twelfth of the planet's year. Some individual days see higher or lower temperatures. A Martian day is called a sol. Labels on the horizontal axis indicate the number of sols after Curiosity's landing, which occurred during late winter in Mars' southern hemisphere.

The middle chart presents information about water vapor in the air around Curiosity. The red band shows the water-vapor content. Even at the highest points of the year, during summers at Gale Crater, the amount of water is far less than one percent of typical levels on Earth. The blue band shows relative humidity, which is a function of temperature as well as water-vapor content. Colder air can hold less water vapor before the water begins condensing. Because the air gets so much colder on Mars than on Earth, even the scant amount of water in the air around Curiosity can bring relative humidity above 60 percent during nighttime in winter, as indicated by the peaks in the blue band. In the daytime, the relative humidity is near zero.

The lower chart presents data from Curiosity's measurements of atmospheric pressure. The width of the band is an indication of how the pressure varies throughout each sol. The seasonal ups and downs show a known global pattern on Mars that illustrates another way the Red Planet differs from Earth. Most of the thin Martian atmosphere is carbon dioxide. Some of the carbon dioxide freezes out of the atmosphere into seasonal polar caps of carbon-dioxide ice. The biggest dips in the blue band are in the long southern-hemisphere winters -- the result of carbon dioxide temporarily shifting out of the atmosphere into Mars' south polar ice cap. The dip in southern summer, less dramatic, results from carbon dioxide being captured temporarily into the less-massive north polar ice cap.