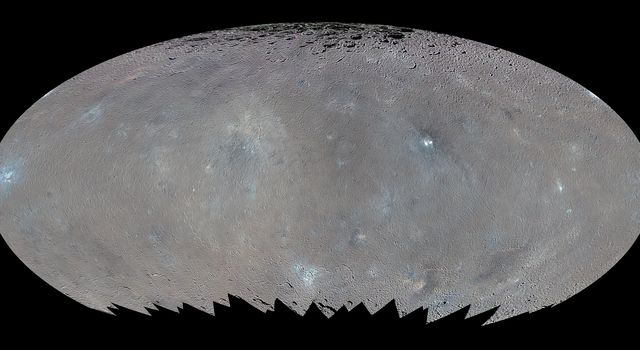 Ceres' Haulani Crater (21 miles, 34 kilometers wide) is shown in these views from the visible and infrared mapping spectrometer (VIR) aboard NASA's Dawn spacecraft. These views reveal variations in the region's brightness, mineralogy and temperature at infrared wavelengths.

The view at center is a false color image, highlighting differences in the types of rock and ejected material around the crater. Scientists see this as evidence that the material in this area is not uniform, and that the crater's interior has a different composition than its surroundings. This is what scientists call a color ratio image (blue: 3200/3300 nanometers, green: 2900/3100 nanometers, red: 2600/2700 nanometers).