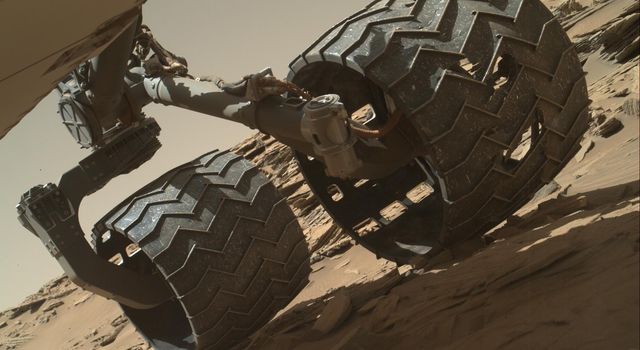 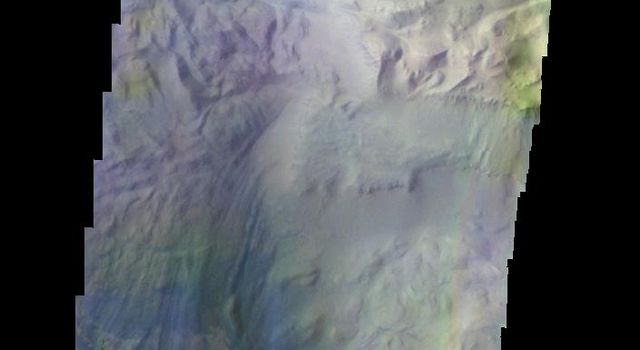 Figure 1
Click on the image for larger view
Download the full resolution TIFF file
This early-morning view from the Mast Camera (Mastcam) on NASA's Curiosity Mars rover covers a field of view of about 130 degrees of the inner wall of Gale Crater. It was acquired during a period when there was very little dust or haze in the atmosphere, so conditions were optimal for long-distance imaging. The right side of the image fades into the glare of the rising sun.

Mastcam's right-eye camera, which has a telephoto lens, took the component images on March 16, 2016, during the 1,284th sol, or Martian day, of Curiosity's work on Mars. The rover's location was on the "Naukluft Plateau" of lower Mount Sharp, inside Gale Crater. The view spans from west-northwest on the left to northeast on the right. Details of the morphology (shape and pattern of features) on the wall, which include gullies, channels and debris fans help geologists understand the processes that have shaped the crater and transported sediments -- sand, pebbles and larger rocks -- down to the floor of the crater. Some of the foothills show layers morphologically not unlike the layers Curiosity is exploring near the base of Mount Sharp, suggesting that the crater was filled along the north wall with sediments that have in large part now been eroded away, much as happened closer to Mount Sharp.

The scene is presented with a color adjustment that approximates white balancing, to resemble how the terrain would appear under daytime lighting conditions on Earth.

Photojournal Note: The main image is also available in full resolution TIFF file PIA20333_full.tif. This file may be too large to view from a browser; it can be downloaded onto your desktop by right-clicking on the previous link and viewed with image viewing software.