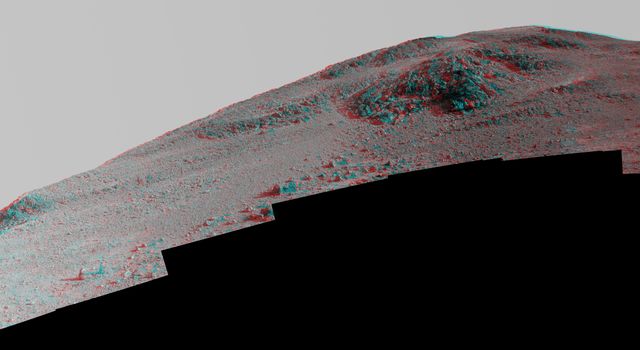 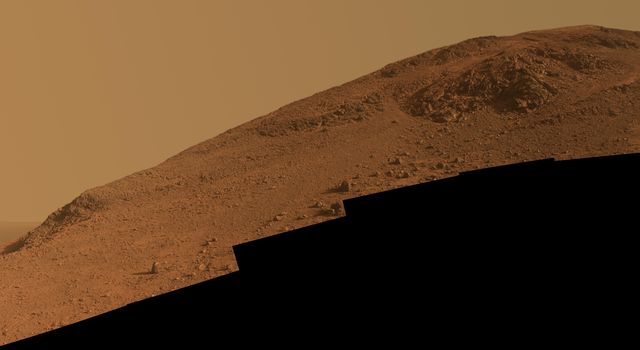 This scene from NASA's Mars Exploration Rover Opportunity looks upward at "Knudsen Ridge" on the southern edge of "Marathon Valley" from inside the valley.

In this version of the scene the landscape is presented in enhanced color to make differences in surface materials more easily visible. Reddish rock, such as within and between the knobs near the top of the scene, is what the rover team calls "red zone" material. Red zone locations in Marathon Valley correspond to locations of clay minerals mapped from orbit. Another view of Marathon Valley red zone material is at PIA19820.

An approximately true color version of the Knudsen Ridge scene is at PIA20318. A stereo version is at PIA20320.

The informal name Knudsen Ridge was chosen by the Opportunity science team to honor the memory of Danish astrophysicist and planetary scientist Jens Martin Knudsen (1930-2005), a founding member of the team.

The view combines multiple images taken with the panoramic camera (Pancam) on Opportunity's mast on Oct. 29 and Oct. 30, 2015, during the 4,182nd and 4,183rd Martian days, or sols, of the rover's work on Mars. By February 2016, the rover ascended slopes of about 30 degrees onto the flank of Knudsen Ridge, headed for targets of red zone material to examine there.

Color in the scene comes from component images taken through three of the Pancam's color filters, centered on wavelengths of 753 nanometers (near-infrared), 535 nanometers (green) and 432 nanometers (violet). The view spans from southeast on the left to southwest on the right.

Marathon Valley cuts generally east-west through the western rim of Endeavour Crater. The valley's name refers to the distance Opportunity drove from its 2004 landing site to arrival at this location in 2014. The valley was a high-priority destination for the rover mission because observations from orbit detected clay minerals there.