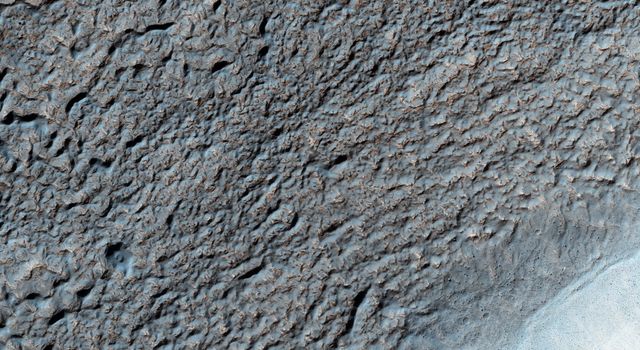 The Coming and Going of Ice 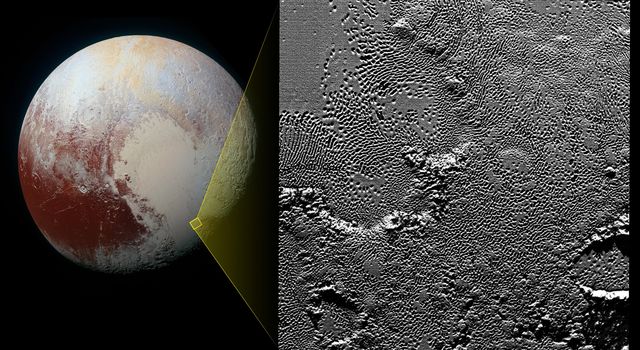 Zooming in on Pluto's Pattern of Pits

This enhanced color mosaic combines some of the sharpest views of Pluto that NASA's New Horizons spacecraft obtained during its July 14 flyby. The pictures are part of a sequence taken near New Horizons' closest approach to Pluto, with resolutions of about 250-280 feet (77-85 meters) per pixel -- revealing features smaller than half a city block on Pluto's surface. Lower resolution color data (at about 2,066 feet, or 630 meters, per pixel) were added to create this new image.

The images form a strip 50 miles (80 kilometers) wide, trending (top to bottom) from the edge of "badlands" northwest of the informally named Sputnik Planum, across the al-Idrisi mountains, onto the shoreline of Pluto's "heart" feature, and just into its icy plains. They combine pictures from the telescopic Long Range Reconnaissance Imager (LORRI) taken approximately 15 minutes before New Horizons' closest approach to Pluto, with -- from a range of only 10,000 miles (17,000 kilometers) -- with color data (in near-infrared, red and blue) gathered by the Ralph/Multispectral Visible Imaging Camera (MVIC) 25 minutes before the LORRI pictures.

The wide variety of cratered, mountainous and glacial terrains seen here gives scientists and the public alike a breathtaking, super-high-resolution color window into Pluto's geology. e border between the relatively smooth Sputnik Planum ice sheet and the pitted area, with a series of hills forming slightly inside this unusual "shoreline."