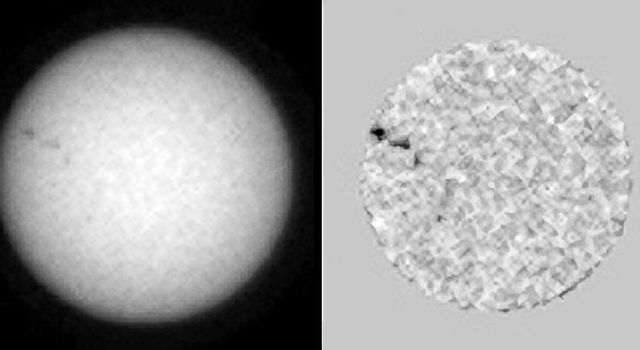 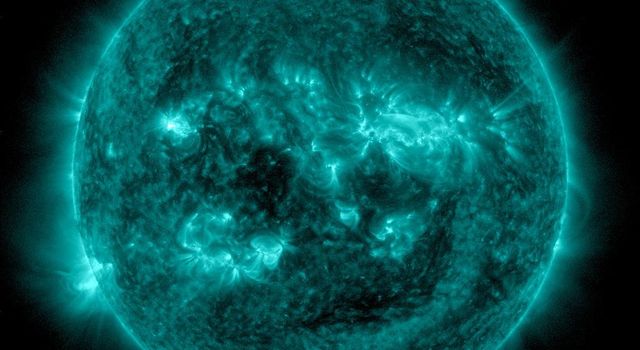 The sequence of seven images in this animation shows sunspots as viewed by NASA's Curiosity Mars rover from June 27 to July 8, 2015. From Mars, the rover was in position to see the opposite side of the sun from the side facing Earth during this period.

One sunspot seen in this series emerged while under Curiosity's view, subsequently rotated out of view over the July 4 weekend. That sunspot's location showed up a few days later observable from Earth's point of view as an area of solar eruptions and source of a coronal mass ejection. The coronal mass ejection affected interplanetary space weather, though not in Earth's direction.

The images were taken by the right-eye camera of Curiosity's Mast Camera (Mastcam), which has a 100-millimeter telephoto lens. The view on the left of each pair in this sequence has little processing other than calibration and putting north toward the top of each frame. The view on the right of each pair has been enhanced to make sunspots more visible. The apparent granularity throughout these enhanced images is an artifact of this processing.

The sun completes a rotation about once a month -- faster near its equator than near its poles. In this sequence, a sunspot in the southern hemisphere can be seen rotating toward the right, then disappearing around that side of the sun. That sunspot appeared July 6 as the location of a solar eruption as seen from NASA's Earth-orbiting Solar Dynamics Observatory (PIA19680) and two days later as a sunspot seen by that observatory (http://sdo.gsfc.nasa.gov/assets/img/browse/2015/07/08/20150708_162454_3072_HMII.jpg). The coronal mass ejection originating from this location on the sun is shown and modeled at http://go.nasa.gov/1JSXLF3.