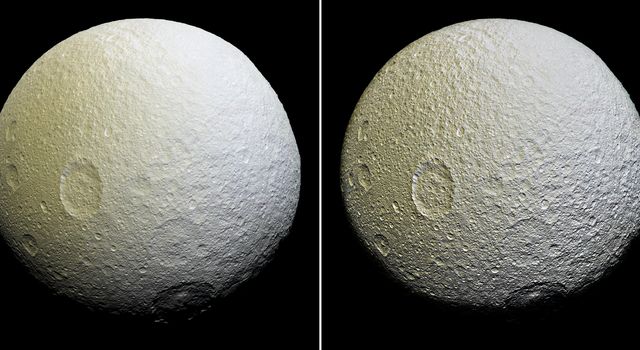 The Colors of Tethys II 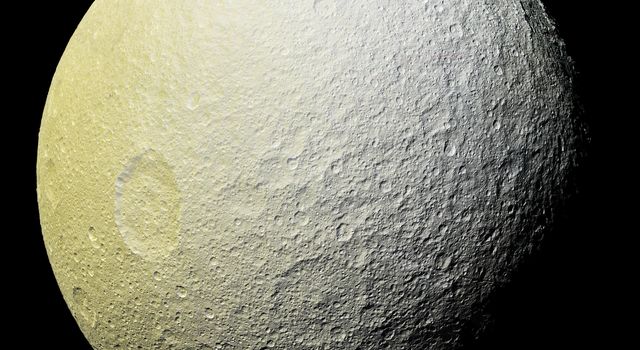 The Colors of Tethys I

Unusual arc-shaped, reddish streaks cut across the surface of Saturn's ice-rich moon Tethys in this enhanced-color mosaic. The red streaks are narrow, curved lines on the moon's surface, only a few miles (or kilometers) wide but several hundred miles (or kilometers) long. The red streaks are among the most unusual color features on Saturn's moons to be revealed by Cassini's cameras.

A few of the red arcs can be faintly seen in Cassini imaging observations made earlier in the mission, but the color images for this observation, which were obtained in April 2015, were the first to show large northern areas of Tethys under the illumination and viewing conditions necessary to see the features clearly. As the Saturn system moved into its northern hemisphere summer over the past few years, northern latitudes have become increasingly well illuminated. As a result, the red arc features have become clearly visible for the first time.

The origin of the features and their reddish color is currently a mystery to Cassini scientists. Possibilities being studied include ideas that the reddish material is exposed ice with chemical impurities, or the result of outgassing from inside Tethys. The streaks could also be associated with features like fractures that are below the resolution of the available images.

Except for a few small craters on Dione, reddish tinted features are rare on other moons of Saturn. However, many reddish features are observed on the geologically young surface of Jupiter's moon Europa.

Images taken using clear, green, infrared and ultraviolet spectral filters were combined to create the view, which highlights subtle color differences across Tethys' surface at wavelengths not visible to human eyes. The moon's surface is fairly uniform in natural color.

The yellowish tones on the left side of the view are a result of alteration of the moon's surface by high-energy particles from Saturn's magnetosphere. This particle radiation slams into the moon's trailing hemisphere, modifying it chemically and changing its appearance in enhanced-color views like this one.

This view combines Cassini ISS ultraviolet, green and infrared images to generate a red-green-blue color map of the surface, and was created by Dr. Paul Schenk (http://www.lpi.usra.edu/lpi/schenk/) of the Lunar and Planetary Institute in Houston Texas from imaging data returned in 2014.