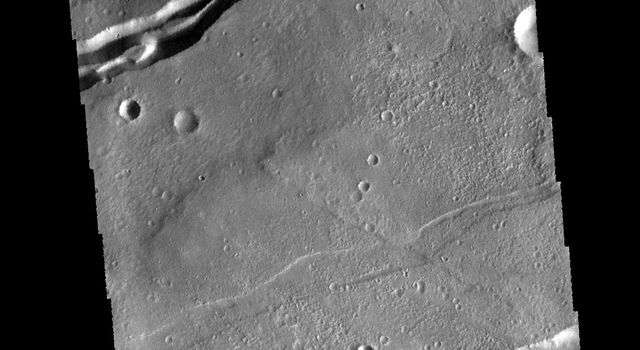 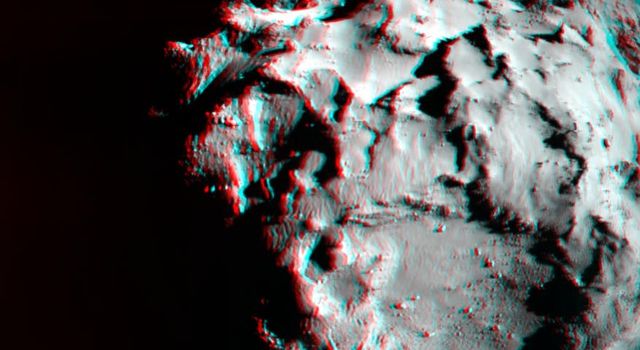 The puzzling, fascinating surface of Jupiter's icy moon Europa looms large in this newly-reprocessed color view, made from images taken by NASA's Galileo spacecraft in the late 1990s. This is the color view of Europa from Galileo that shows the largest portion of the moon's surface at the highest resolution.

The view was previously released as a mosaic with lower resolution and strongly enhanced color (see PIA02590). To create this new version, the images were assembled into a realistic color view of the surface that approximates how Europa would appear to the human eye.

The scene shows the stunning diversity of Europa's surface geology. Long, linear cracks and ridges crisscross the surface, interrupted by regions of disrupted terrain where the surface ice crust has been broken up and re-frozen into new patterns.

Color variations across the surface are associated with differences in geologic feature type and location. For example, areas that appear blue or white contain relatively pure water ice, while reddish and brownish areas include non-ice components in higher concentrations. The polar regions, visible at the left and right of this view, are noticeably bluer than the more equatorial latitudes, which look more white. This color variation is thought to be due to differences in ice grain size in the two locations.

Images taken through near-infrared, green and violet filters have been combined to produce this view. The images have been corrected for light scattered outside of the image, to provide a color correction that is calibrated by wavelength. Gaps in the images have been filled with simulated color based on the color of nearby surface areas with similar terrain types.

This global color view consists of images acquired by the Galileo Solid-State Imaging (SSI) experiment on the spacecraft's first and fourteenth orbits through the Jupiter system, in 1995 and 1998, respectively. Image scale is 1 mile (1.6 kilometers) per pixel. North on Europa is at right.