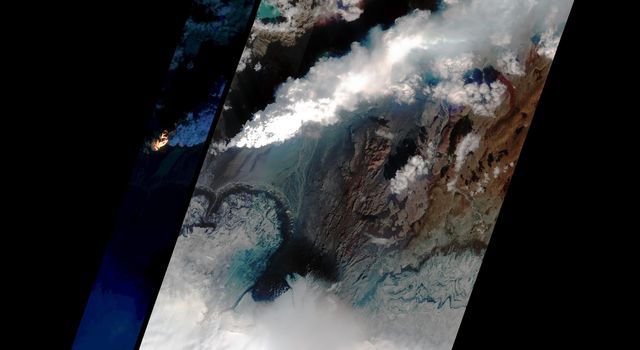 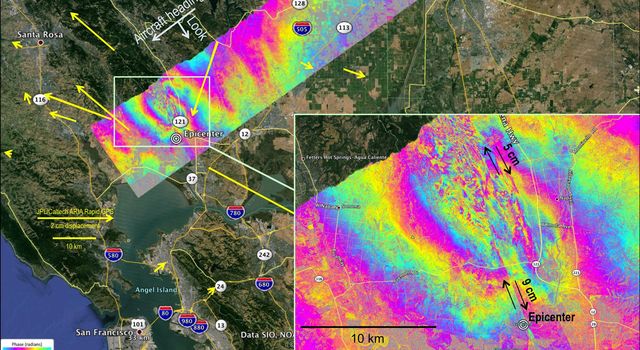 A magnitude 6.0 earthquake struck southern Napa county northeast of San Francisco, California, on Aug. 24, 2014, causing significant damage in the city of Napa and nearby areas. The earthquake deformed Earth's surface and this deformation was measured by precise analyses of data from nearby Global Positioning System (GPS) tracking stations of the Plate Boundary Observatory (operated by UNAVCO for the National Science Foundation) and the Bay Area Rapid Deformation network (operated by Berkeley Seismological Laboratory). Black arrows on this map show the measured permanent horizontal movement, with black ellipses showing the uncertainty of the measurement. The scale is shown by the black arrow in the lower right corner. The GPS data were analyzed by scientists at NASA's Jet Propulsion Laboratory in Pasadena, California.

NASA JPL scientists, in collaboration with the Italian Space Agency's (ASI) Center for the Interpretation of Earth Observation Data and the UniversitàÂ  degli studi della Basilicata, also analyzed radar images from ASI's COSMO-SkyMed satellites to calculate a map of the deformation of Earth's surface caused by the earthquake, as shown in this false-color map that has been combined with shaded relief topography in gray. The colors indicate the amount of permanent surface movement that occurred almost entirely due to the earthquake, as viewed by the satellite, during the one-month interval between two COSMO-SkyMed images, one before and one after the earthquake.