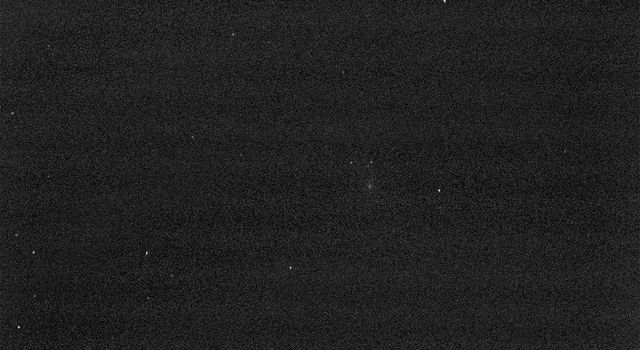 These images were taken of comet C/2013 A1 Siding Spring by NASA's Mars Reconnaissance Orbiter on Oct. 19, 2014, during the comet's close flyby of Mars and the spacecraft. Comet Siding Spring is on its first trip this close to the sun from the Oort Cloud at the outer fringe of the solar system. This is the first resolved imaging of the nucleus of a long-period comet.

The High Resolution Imaging Science Experiment (HiRISE) camera on Mars Reconnaissance Orbiter acquired images of this comet from a minimum distance of about 86,000 miles (138,000 kilometers), yielding a scale of about 150 yards (138 meters) per pixel. Telescopic observers had modeled the size of the nucleus as about half a mile, or one kilometer, wide. However, the best HiRISE images show only two to three pixels across the brightest feature, probably the nucleus, suggesting a size less than half that estimate.

This composite image shows two versions of each of two of the best HiRISE images of the comet. Shown at top are images with the full dynamic range, showing the nucleus and bright coma near the nucleus. Shown at bottom are versions where the fainter outer coma is brightened, saturating the inner region. The images at left and right were taken about nine minutes apart.

These closest-approach images were made possible due to very precise pointing and slewing of the Mars Reconnaissance Orbiter by engineers at Lockheed Martin in Denver, based on comet position calculations by engineers at NASA's Jet Propulsion Laboratory, Pasadena, California. HiRISE acquired three images 12 days before closest approach, when the comet was barely detectable above the "noise level" of the images. These early images indicated the comet was not quite at its predicted location. This new viewing angle on the comet was used to update its predicted location and timing at closest approach. Without this update, the comet may have been outside the HiRISE image area in the best images.

For more information on these images and future updates, see http://hirise.lpl.arizona.edu.