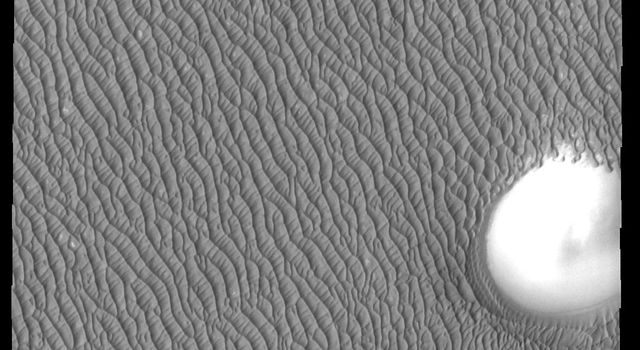 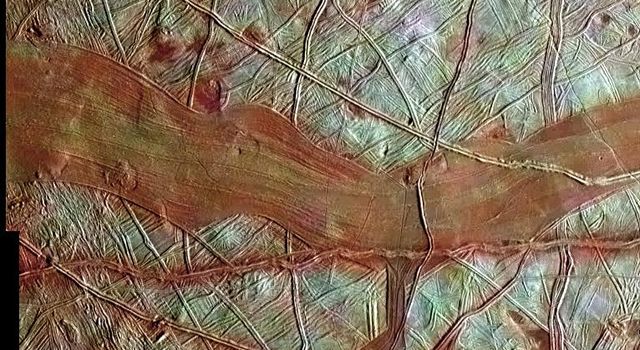 NASA's Curiosity Mars rover is stepping on the boundary line. Being called offside is a good thing in this case, but don't tell the World Cup referees!

The blue line added to this June 27, 2014, image from the High Resolution Imaging Science Experiment (HiRISE) camera on NASA's Mars Reconnaissance Orbiter is the edge of the ellipse that was charted as safe terrain for the rover's August 2012 landing. Curiosity is visible right on the ellipse line in the lower center of the image. This 3-sigma landing ellipse is about 4 miles long and 12 miles wide (7 kilometers by 20 kilometers). Curiosity reached the edge of it for the first time with a drive of about 269 feet (82 meters) earlier that day.

OK, I don't hear any cheering yet. You must be wondering, "What the heck is a 3-sigma landing ellipse?" It is a statistical prediction made prior to landing to determine how far from a targeted center point the rover might land, given uncertainties such as the atmospheric conditions on landing day. The "3-sigma" part means three standard deviations, so the rover was very, very likely (to about the 99.9-percent level) to land somewhere inside this ellipse. Such 3-sigma ellipses get a lot of scrutiny during landing-site selection because we don't want anything dangerous for a landing -- such as boulders of cliffs -- inside the ellipse.

The Mars Science Laboratory mission did not try to land Curiosity right at the base of Mount Sharp, where the most interesting terrains lay, as seen from orbit. To do so would have put unsafe slopes within the landing ellipse. Instead, the rover spent almost exactly one Martian year (687 Earth days) roving and exploring before arriving at the edge of the ellipse.

Maybe the landing-site aficionados are cheering now? Let's try this: Now that Curiosity is outside the safe-to-land ellipse, the landscape it traverses will get even more interesting. The rover can drive around landscape features that would have been dangerous to land on. Both the scenery and the geology should be even more exciting in the next Mars year.