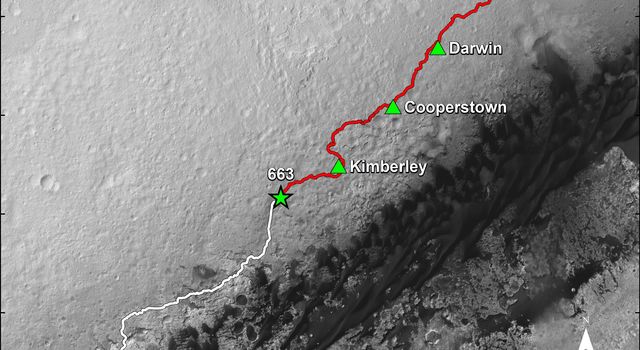 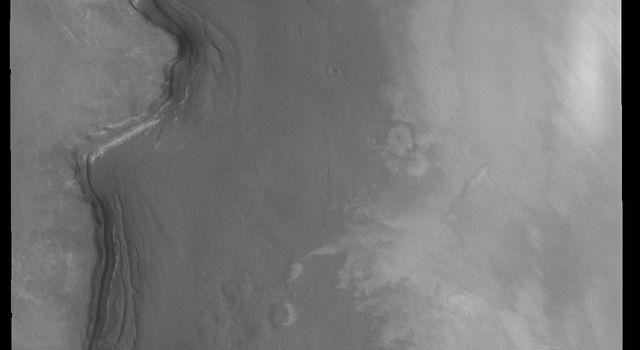 NASA's Curiosity Mars rover used the camera at the end of its arm in April and May 2014 to take dozens of component images combined into this self-portrait where the rover drilled into a sandstone target called "Windjana." The camera is the Mars Hand Lens Imager (MAHLI), which previously recorded portraits of Curiosity at two other important sites during the mission: "Rock Nest" (PIA16468) and "John Klein" (PIA16937).

Winjana is within a science waypoint site called "The Kimberley," where sandstone layers with different degrees of resistance to wind erosion are exposed close together.

The view does not include the rover's arm. It does include the hole in Windjana produced by the hammering drill on Curiosity's arm collecting a sample of rock powder from the interior of the rock. The hole is surrounded by grayish cuttings on top of the rock ledge to the left of the rover. The Mast Camera (Mastcam) atop the rover's remote sensing mast is pointed at the drill hole. A Mastcam image of the drill hole from that perspective is at http://mars.jpl.nasa.gov/msl/multimedia/raw/?rawid=0626MR0026780000401608E01_DXXX&s=626. The hole is 0.63 inch (1.6 centimeters) in diameter. The rover's wheels are 20 inches (0.5 meter) in diameter.