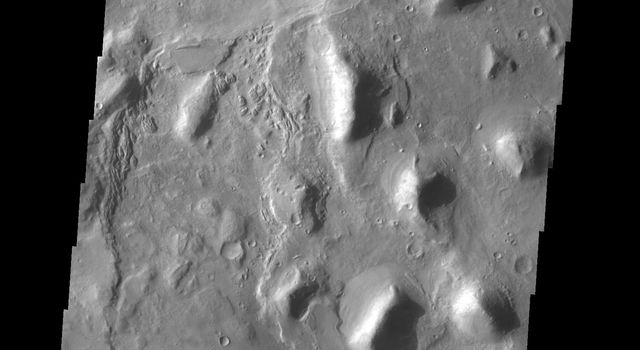 This rock encountered by NASA's Curiosity Mars rover is an iron meteorite called "Lebanon," similar in shape and luster to iron meteorites found on Mars by the previous generation of rovers, Spirit and Opportunity. Lebanon is about 2 yards or 2 meters wide (left to right, from this angle). The smaller piece in the foreground is called "Lebanon B."

This view combines a series of high-resolution circular images taken by the Remote Micro-Imager (RMI) of Curiosity's Chemistry and Camera (ChemCam) instrument with color and context from rover's Mast Camera (Mastcam). The component images were taken during the 640th Martian day, or sol, of Curiosity's work on Mars (May 25, 2014).

The imaging shows angular shaped cavities on the surface of the rock. One possible explanation is that they resulted from preferential erosion along crystalline boundaries within the metal of the rock. Another possibility is that these cavities once contained olivine crystals, which can be found in a rare type of stony-iron meteorites called pallasites, thought to have been formed near the core-mantle boundary within an asteroid.

ChemCam is one of 10 instruments in Curiosity's science payload. The U.S. Department of Energy's Los Alamos National Laboratory, in Los Alamos, New Mexico, developed ChemCam in partnership with scientists and engineers funded by the French national space agency (CNES), the University of Toulouse and the French national research agency (CNRS). More information about ChemCam is available at http://www.msl-chemcam.com. The rover's MastCam was built by and is operated by Malin Space Science Systems, San Diego.