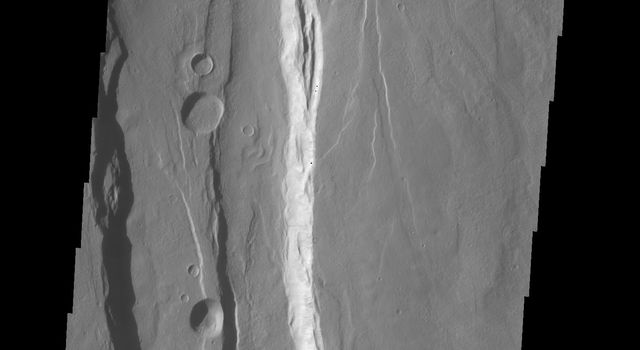 This image from the Navigation Camera (Navcam) on NASA's Curiosity Mars rover shows two holes at top center drilled into a sandstone target called "Windjana." The farther hole, with larger pile of tailings around it, is a full-depth sampling hole. It was created by the rover's hammering drill while the drill collected rock-powder sample material from the interior of the rock. The nearer hole was created by a shallower test drilling into the rock in preparation for the sample collection. Each hole is 0.63 inch (1.6 centimeters) in diameter. The full-depth hole is about 2.6 inches (6.5 centimeters) deep, drilled during the 621st Martian day, or sol, of Curiosity's work on Mars (May 5, 2014). The test hole is about 0.8 inch (2 centimeters) deep, drilled on Sol 615 (April 29, 2014). This image was taken on Sol 621 (May 5).

The sandstone target's informal name comes from Windjana Gorge in Western Australia. The rock is within a waypoint location called "The Kimberley," where sandstone outcrops with differing resistance to wind erosion result in a stair-step pattern of layers. Windjana is within what the team calls the area's "middle unit," because it is intermediate between rocks that form buttes in the area and lower-lying rocks that show a pattern of striations.