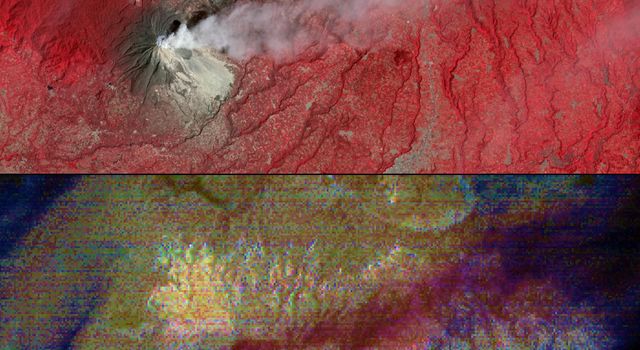 Pulses from the Sun Saturn's auroras glow when energetic electrons dive into the planet's atmosphere and collide with hydrogen molecules. Sometimes a blast of fast solar wind, composed of mostly electrons and protons, creates an active aurora at Saturn, as occurred on April 5 and May 20, 2013.

The first set of images, as seen in the ultraviolet part of the spectrum by Hubble, shows an active aurora dancing around Saturn's north pole on April 5. The movie then shows a relatively quiet time between April 19 to 22 and between May 18 and 19. The aurora flares up again in Hubble images from May 20. This version, shown in false-color, has been processed to show the auroras more clearly.

A second set of ultraviolet images shows a closer view of an active north polar aurora in white. This set comes from Cassini ultraviolet imaging spectrograph observations on May 20 and 21.

The last set of images, in the infrared, shows a quiet southern aurora (in green) in observations from Cassini's visual and infrared mapping spectrometer on May 17. Saturn's inner heat glows in red, with dark areas showing where high clouds block the heat.

The Cassini-Huygens mission is a cooperative project of NASA, the European Space Agency and the Italian Space Agency. NASA's Jet Propulsion Laboratory, a division of the California Institute of Technology in Pasadena, manages the mission for NASA's Science Mission Directorate, Washington, D. C. The Cassini orbiter was designed, developed and assembled at JPL. The ultraviolet imaging spectrograph was designed and built at, and the team is based at the University of Colorado, Boulder. The VIMS team is based at the University of Arizona in Tucson.