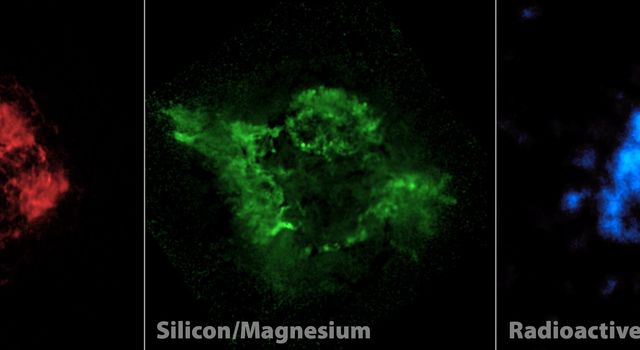 Adding a New 'Color' to Palate of Cassiopeia A Images 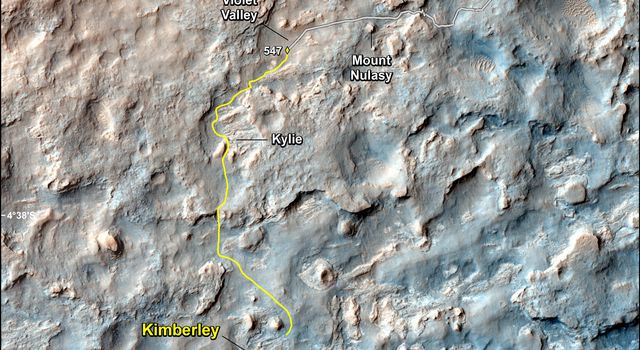 The mystery of how Cassiopeia A exploded is unraveling thanks to new data from NASA's Nuclear Spectroscopic Telescope Array, or NuSTAR. In this image, NuSTAR data, which show high-energy X-rays from radioactive material, are colored blue. Lower-energy X-rays from non-radioactive material, imaged previously with NASA's Chandra X-ray Observatory, are shown in red, yellow and green.

The new view shows a more complete picture of Cassiopeia A, the remains of a star that blew up in a supernova event whose light reached Earth about 350 years ago, when it could have appeared to observers as a star that suddenly brightened. The remnant is located 11,000 light-years away from Earth.

NuSTAR is the first telescope capable of taking detailed pictures of the radioactive material in the Cassiopeia A supernova remnant. While other telescopes have detected radioactivity in these objects before, NuSTAR is the first capable of pinpointing the location of the radioactivity, creating maps. When massive star explode, they create many elements: non-radioactive ones like iron and calcium found in your blood and bones; and radioactive elements like titanium-44, the decay of which sends out high-energy X-ray light that NuSTAR can see.

By mapping titanium-44 in Cassiopeia A, astronomers get a direct look at what happened in the core of the star when it was blasted to smithereens. These NuSTAR data complement previous observations made by Chandra, which show elements, such as iron, that were heated by shock waves farther out from the remnant's center.

In this image, the red, yellow and green data were collected by Chandra at energies ranging from 1 to 7 kiloelectron volts (keV). The red color shows heated iron, and green represents heated silicon and magnesium. The yellow is what astronomers call continuum emission, and represents a range of X-ray energies.

The titanium-44, shown in blue, was detected by NuSTAR at energies ranging between 68 and 78 keV.

The NuSTAR observations point to a possible solution to the puzzle of how stars detonate. The fact that the titanium -- which is a direct tracer of the supernova blast -- is concentrated in clumps at the core supports a theory referred to as "mild asymmetries." In this scenario, material sloshes about at the heart of the supernova, reinvigorating a shock wave and allowing it to blow out the star's outer layers.