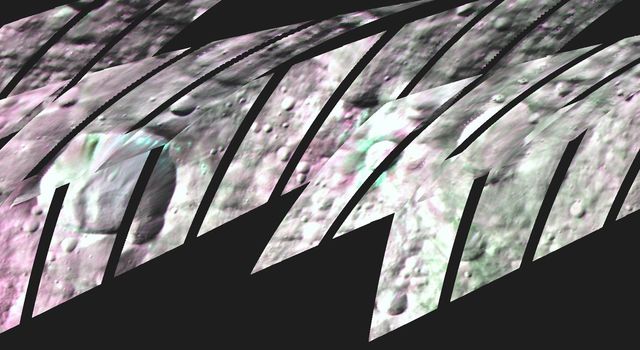 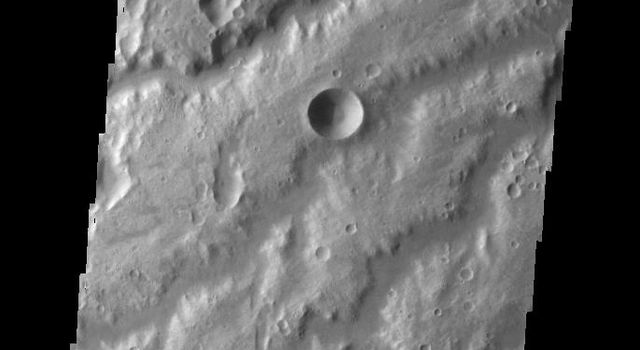 This colorized map from NASA's Dawn mission shows the types of rocks and minerals distributed around the surface of the giant asteroid Vesta. In this color scheme, red shows diogenite, a type of mineral thought to be formed through magmatic processes deep in the crust. Green shows howardite, a type of surface rock that is made of broken bits of different materials that are excavated, ejected and mixed by meteor impacts. These types of rocks are the most abundant observed on Vesta's surface. Blue shows eucrite, a type of rock formed in the crust of Vesta that isn't as deep down as diogenite. For example, Vesta's equatorial region is replete with eucrites. Yellow areas show regions with diogenite and howardite. The yellow and red areas have large quantities of the magnesium-and silicate-rich mineral diogenite, especially in the southern hemisphere. Cyan areas show regions with eucrite and howardite. Many howardite, eucrite and diogenite meteorites have been found on Earth, and earlier work from Dawn confirmed theories that they came from Vesta.

The location of two craters, Arruntia and Bellicia, are noted in the annotated version. At these craters, scientists unexpectedly found the mineral olivine. The outlines of the giant craters Rheasilvia and Veneneia are also noted. Scientists thought they'd find olivine in those locations but have not.

The data for this map were obtained by Dawn's visible and infrared mapping spectrometer (VIR) during Dawn's orbital measurements of Vesta from 2011 to 2012.

The Dawn mission to Vesta and Ceres is managed by the Jet Propulsion Laboratory, for NASA's Science Mission Directorate, Washington, D.C. It is a project of the Discovery Program managed by NASA's Marshall Space Flight Center, Huntsville, Ala. UCLA is responsible for overall Dawn mission science. Orbital Sciences Corporation of Dulles, Va., designed and built the Dawn spacecraft. The visible and infrared mapping spectrometer was provided by the Italian Space Agency and is managed by Italy's National Institute for Astrophysics, Rome, in collaboration with Selex Galileo, where it was built.