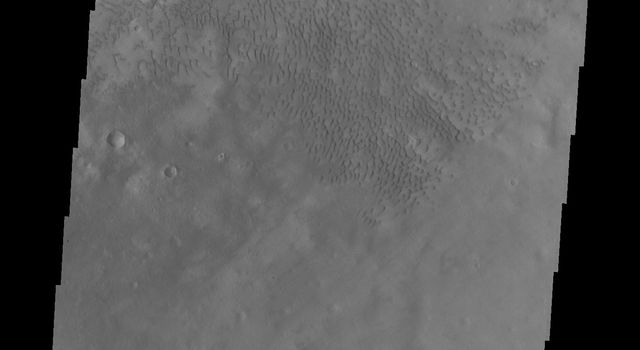 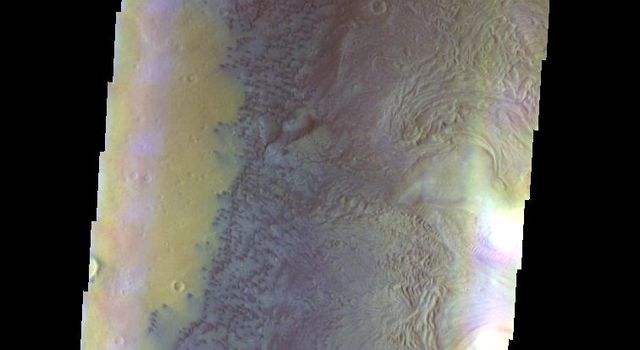 Investigating Mars: Moreux Crater
Click on an individual image for the larger version

After more than 13 years at Saturn, and with its fate sealed, NASA's Cassini spacecraft bid farewell to the Saturnian system by firing the shutters of its wide-angle camera and capturing this last, full mosaic of Saturn and its rings two days before the spacecraft's dramatic plunge into the planet's atmosphere.

During the observation, a total of 80 wide-angle images were acquired in just over two hours. This view is constructed from 42 of those wide-angle shots, taken using the red, green and blue spectral filters, combined and mosaicked together to create a natural-color view.

Six of Saturn's moons -- Enceladus, Epimetheus, Janus, Mimas, Pandora and Prometheus -- make a faint appearance in this image. (Numerous stars are also visible in the background.)

The ice-covered moon Enceladus -- home to a global subsurface ocean that erupts into space -- can be seen at the 1 o'clock position. Directly below Enceladus, just outside the F ring (the thin, farthest ring from the planet seen in this image) lies the small moon Epimetheus. Following the F ring clock-wise from Epimetheus, the next moon seen is Janus. At about the 4:30 position and outward from the F ring is Mimas. Inward of Mimas and still at about the 4:30 position is the F-ring-disrupting moon, Pandora. Moving around to the 10 o'clock position, just inside of the F ring, is the moon Prometheus.

This view looks toward the sunlit side of the rings from about 15 degrees above the ring plane. Cassini was approximately 698,000 miles (1.1 million kilometers) from Saturn, on its final approach to the planet, when the images in this mosaic were taken. Image scale on Saturn is about 42 miles (67 kilometers) per pixel. The image scale on the moons varies from 37 to 50 miles (59 to 80 kilometers) pixel. The phase angle (the Sun-planet-spacecraft angle) is 138 degrees.