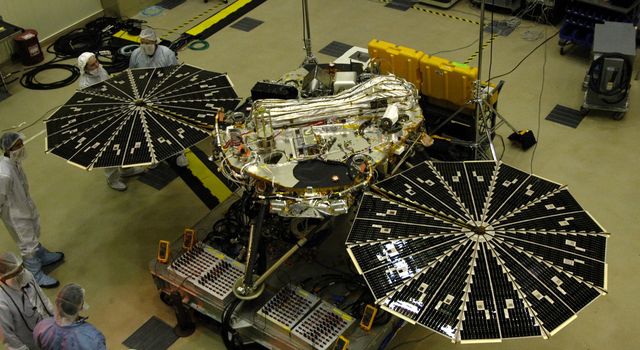 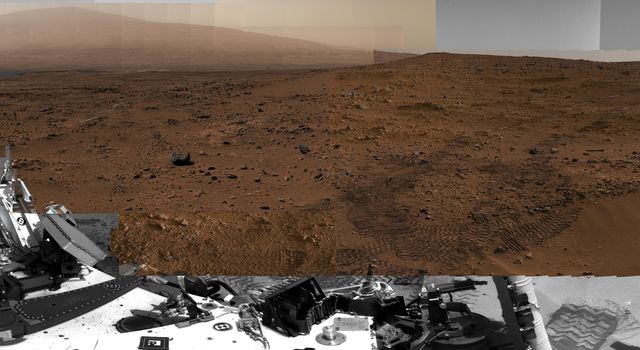 This image is a scaled-down version of a full-circle view which combined nearly 900 images taken by NASA's Curiosity Mars rover. The Full-Res TIFF and Full-Res JPEG provided in the top right legend are smaller resolution versions of the 1.3 billion pixel version for easier browser viewing and downloading. Viewers can explore the full-circle image with pan and zoom controls at http://mars.nasa.gov/bp1/.

The view is centered toward the south, with north at both ends. It shows Curiosity at the "Rocknest" site where the rover scooped up samples of windblown dust and sand. Curiosity used three cameras to take the component images on several different days between Oct. 5 and Nov. 16, 2012.

This first NASA-produced gigapixel image from the surface of Mars is a mosaic using 850 frames from the telephoto camera of Curiosity's Mast Camera instrument, supplemented with 21 frames from the Mastcam's wider-angle camera and 25 black-and-white frames -- mostly of the rover itself -- from the Navigation Camera. It was produced by the Multiple-Mission Image Processing Laboratory (MIPL) at NASA's Jet Propulsion Laboratory, Pasadena, Calif.

This version of the panorama retains "raw" color, as seen by the camera on Mars under Mars lighting conditions. A white-balanced version is available at PIA16918. The view shows illumination effects from variations in the time of day for pieces of the mosaic. It also shows variations in the clarity of the atmosphere due to variable dustiness during the month while the images were acquired.