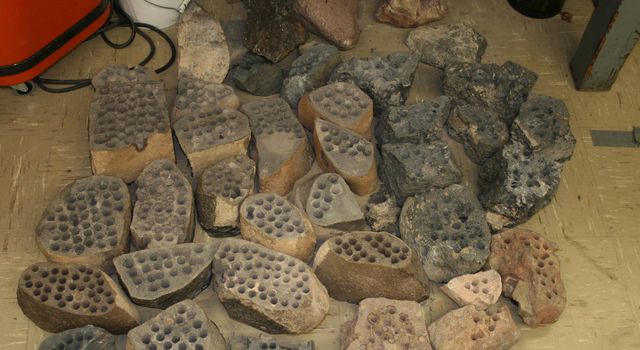 Preparation on Earth for Drilling on Mars 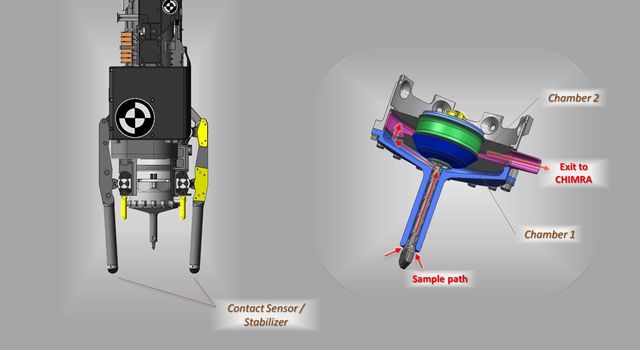 This set of images from Mars shows the handiwork of different tools on three missions to the surface of Mars. The action of each of the tools has sometimes been referred to as drilling, but the functions of the tools have been different for each mission.

On the left is a rock on which NASA's Mars Exploration Rover Opportunity used the rock abrasion tool on the rover's robotic arm. Opportunity and its twin, Spirit, were each equipped with one of these tools to grind away the surface layer of rocks and expose interior rock material to examination, in place, by instruments on the rover. The diameter of the abraded circle is 1.8 inches (4.5 centimeters) in diameter. The image was cropped from PIA06355, taken in June 2004 by Opportunity's Panoramic Camera at a target called "London" inside Endurance Crater.

The middle image shows a grid of shallow holes cut into icy soil by NASA's Phoenix Mars Lander using the motorized rasp on the back of the scoop on the lander's robotic arm. Phoenix used the rasp to penetrate frozen soil too hard for just scraping with the front-edge blade of the scoop. Soil shavings generated by the rasp were picked up by the scoop for delivery into the lander's analytical instruments. The grid of rasped holes visible in this image, four holes across, is about 2 inches (5 centimeters) wide. The image was cropped from PIA10981, taken in July 2008 by Phoenix's Surface Stereo Imager of a trench called "Snow White."

On the right is the hole produced by the drill on NASA's Mars rover Curiosity during the first drilling into a rock on Mars to collect a sample from inside the rock. Flutes on the bit of the drill on Curiosity's robotic arm transport powdered material generated by drilling up into the drill, for later processing and delivery into analytical instruments inside the rover. The diameter of the hole is 0.63 inch (1.6 centimeters). The image was cropped from PIA16726, taken Feb. 8, 2013, by the Mars Hand Lens Imager on Curiosity's arm after that day's drilling at a target rock called "John Klein."