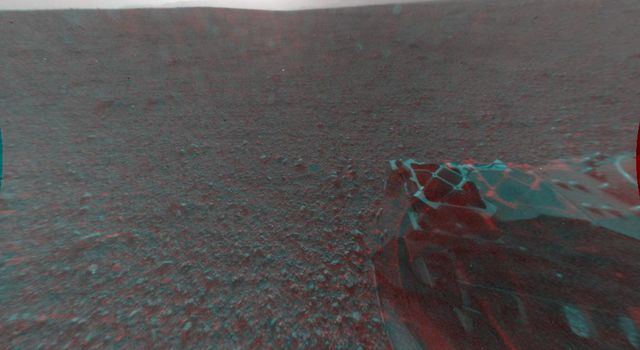 3-D View from Behind Curiosity 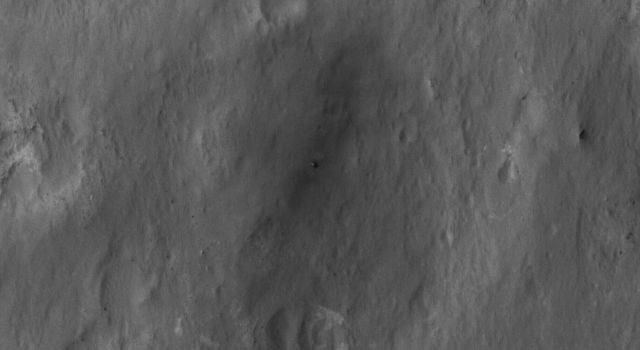 The four main pieces of hardware that arrived on Mars with NASA's Curiosity rover were spotted by NASA's Mars Reconnaissance Orbiter (MRO). The High-Resolution Imaging Science Experiment (HiRISE) camera captured this image about 24 hours after landing. The large, reduced-scale image points out the strewn hardware: the heat shield was the first piece to hit the ground, followed by the back shell attached to the parachute, then the rover itself touched down, and finally, after cables were cut, the sky crane flew away to the northwest and crashed. Relatively dark areas in all four spots are from disturbances of the bright dust on Mars, revealing the darker material below the surface dust.

This image was acquired from a special 41-degree roll of MRO, larger than the normal 30-degree limit. It rolled towards the west and towards the sun, which increases visible scattering by atmospheric dust as well as the amount of atmosphere the orbiter has to look through, thereby reducing the contrast of surface features. Future images will show the hardware in greater detail. Our view is tilted about 45 degrees from the surface (more than the 41-degree roll due to planetary curvature), like a view out of an airplane window. Tilt the images 90 degrees clockwise to see the surface better from this perspective. The views are primarily of the shadowed side of the rover and other objects.