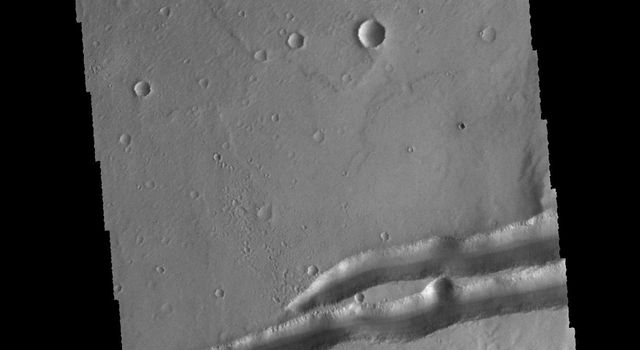 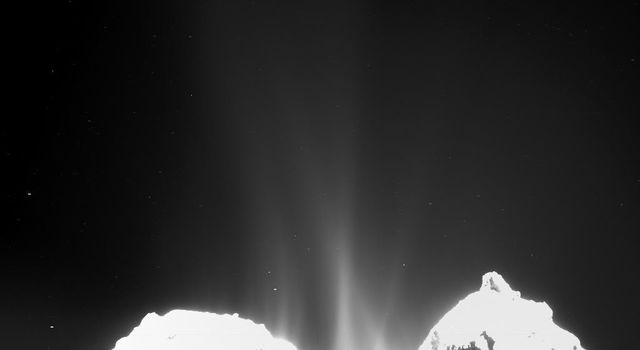 These two infrared images of comet C/2013 A1 Siding Spring were taken by the Compact Reconnaissance Imaging Spectrometer for Mars (CRISM) aboard NASA's Mars Reconnaissance Orbiter on Oct. 19, 2014. Comet Siding Spring -- an Oort Cloud comet that may contain material from the formation of the solar system some 4.6 billion years ago -- was making its first voyage through the inner solar system. CRISM and many other instruments and spacecraft combined to provide an unprecedented data set for an Oort Cloud comet.

CRISM acquired the first image (left) at 11:16 a.m. PDT (2:16 pm EDT) on Oct. 19, just prior to the comet's closest approach to Mars at 11:27 a.m. PDT (2:27 pm EDT), when it came within roughly 88,000 miles (141,000 kilometers) of the planet. The second image was taken 37 minutes later. The comet -- traveling at approximately 34 miles per second (55 kilometers per second) -- had traversed one-third of the way across the Martian sky between those imaging times. The scale of the left image is approximately two and a half miles (four kilometers) per pixel; for the right image, it is about three miles (five kilometers) per pixel. The images, which have had brightness and color enhancements, provide very different perspectives on this intriguing comet.

The images show the inner part of the cloud of dust, called the coma, that is generated around the nucleus by the warmth of the sun. The solid nucleus itself is not resolved. CRISM observed 107 different wavelengths of light in each pixel. Here, only three colors are shown. Researchers think the appearance of color variations in the inner coma could be due to the properties of the comet's dust, possibly dust grain size or composition. The full spectra will be analyzed to better understand the reason for the color variations.