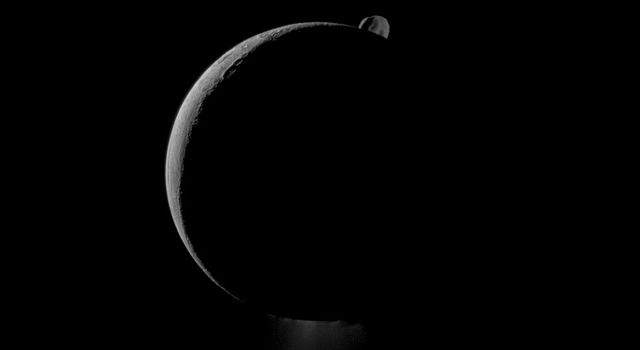 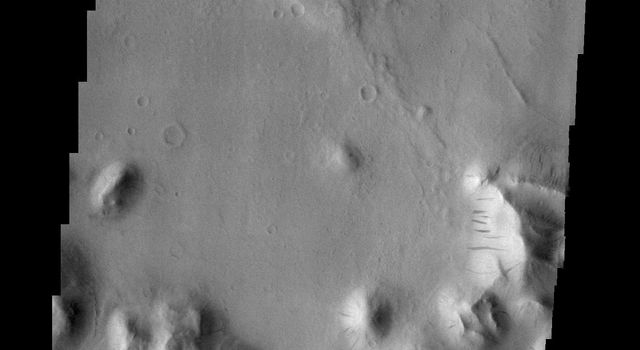 This Dawn FC (framing camera) image shows four large impact craters close to one another on Vesta's surface. Interestingly, each of these four has a distinct preservation state. The crater on the right is the freshest: its rim is clear and sharp and material can be distinctly seen slumping into the center of the crater. The crater in the bottom is partially degraded: its rim is less clear and more rounded and material slumping into the center is only somewhat visible. The crater on the left is more degraded again: its rim is less distinct and very rounded and there is no slumping material visible. It has also has been partially covered by some younger impacts. The crater in the top is the most degraded: its rim is extremely rounded and it has been well covered by many younger impacts. It is so degraded that it may be called a ruin crater. It is clear from this image that as craters get older their rims get less sharp and more rounded, slumping material blends in with the rest of the material on Vesta's surface and the number of younger impacts increases.

This image is in Vesta's Bellicia quadrangle and the center latitude and longitude of the image is 43.6°N, 83.6°E. NASA's Dawn spacecraft obtained this image with its framing camera on October 16th 2011. This image was taken through the camera's clear filter. The distance to the surface of Vesta is 702 km and the image has a resolution of about 70 meters per pixel. This image was acquired during the HAMO (High Altitude Mapping Orbit) phase of the mission.

The Dawn mission to Vesta and Ceres is managed by NASA's Jet Propulsion Laboratory, a division of the California Institute of Technology in Pasadena, for NASA's Science Mission Directorate, Washington D.C.. UCLA is responsible for overall Dawn mission science. Dawn's VIR was provided by ASI, the Italian Space Agency and is managed by INAF, Italy's National Institute for Astrophysics, in collaboration with Selex Galileo, where it was built.