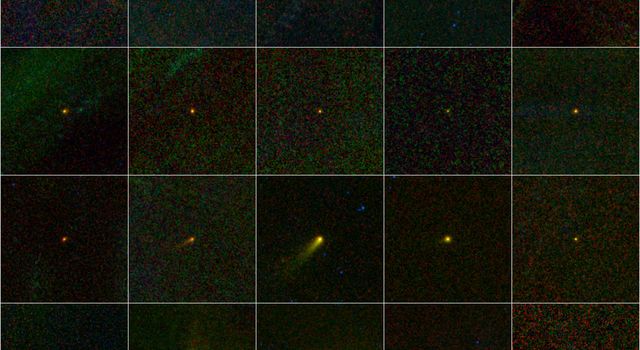 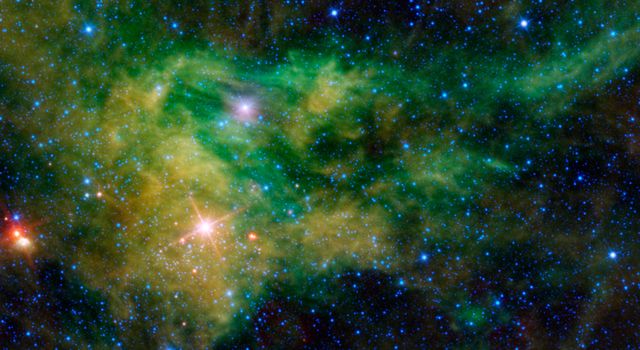 On the morning of February 1, 2011, NASA's Wide-field Infrared Survey Explorer, or WISE, took its last snapshot of the sky. This "last light" image is reminiscent of the "first light" image from WISE, taken only 13 months prior. WISE's final picture shows thousands of stars in a patch of the Milky Way galaxy, covering an area three times the size of the full moon, in the constellation Perseus. In the upper left corner, a faint wispy cloud can be seen bending around a pulsating star called EV Persei.

After its coolant ran out in October of 2010, WISE warmed up from minus 260 degrees to minus 200 degrees Celsius (minus 436 to minus 328 degrees Fahrenheit). This image contains data from the two detectors largely unaffected by the warmer temperatures: the 3.4- and 4.6-micron detectors (the 12- and 22-micron detectors are no longer useful at the warmer temperatures). The color is representational: cyan (blue-green) shows light detected by the 3.4-micron channel, and red shows light seen by the 4.6-micron channel. This region of the sky had been observed by WISE previously in all four of its detectors as part of its primary survey. There is no noticeable difference in the quality between that first image and this newer one, imaged at 3.4 and 4.6 microns.

In the short 13 months that WISE surveyed the sky, it produced millions of infrared images. It covered the whole sky at its four bands, and covered it twice at 3.4 and 4.6 microns. Now that the survey is complete, WISE is being put into hibernation. While the satellite sleeps and circles more than 500 kilometers (about 310 miles) above the Earth's surface, the WISE team is busily preparing its data for two big public releases: one this April, and the final release in the spring of 2012. Even though WISE has taken its last picture, the project will continue to feature some of the best imagery from the survey on a regular basis.