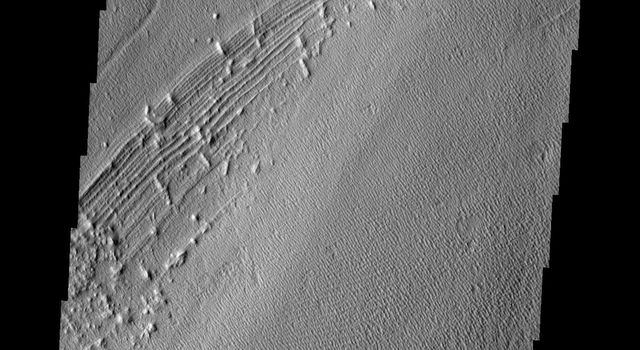 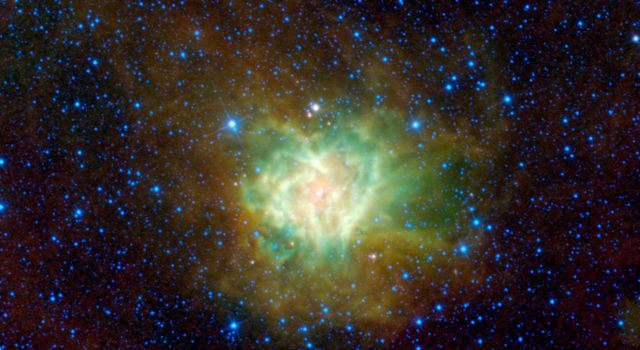 The Sculptor galaxy is shown in different infrared hues, in this new mosaic from NASA's Wide-field Infrared Survey Explorer, or WISE. This image is a composite of infrared light captured with all four of the space telescope's infrared detectors.

The red image (Figure 1) shows the galaxy's active side. Infant stars are heating up their dusty cocoons, particularly in the galaxy's core, making the Sculptor galaxy burst with infrared light. This light -- color-coded red in this view -- was captured using WISE's longest-wavelength, 22-micron detector. The dusty burst of stars is so intense in the core that it generates diffraction spikes. Diffraction spikes are telescope artifacts normally seen only around very bright stars.

The green image (Figure 2) reveals the galaxy's emerging young stars, concentrated in the core and spiral arms. Ultraviolet light from these hot stars is being absorbed by tiny dust or soot particles left over from their formation, making the particles glow with infrared light that has been color-coded green in this view. WISE can see this light with a detector designed to capture wavelengths of 12 microns.

The blue image (Figure 3) was taken with the two shortest-wavelength detectors on WISE (3.4 and 4.6 microns). It shows stars of all ages, which can be found not just in the core and spiral arms, but throughout the galaxy.

The Sculptor galaxy, or NGC 253, was discovered in 1783 by Caroline Herschel, a sister and collaborator of the discoverer of infrared light, Sir William Herschel. It was named after the constellation in which it is found, and is part of a cluster of galaxies known as the Sculptor group. The Sculptor galaxy can be seen by observers in the southern hemisphere with a pair of good binoculars.

NGC 253 is an active galaxy, which means that a significant fraction of its energy output does not come from normal populations of stars within the galaxy. The extraordinarily high amount of star formation occurring in the nucleus of this galaxy has led astronomers to classify it as a "starburst" galaxy. At a distance of approximately 10.5 million light-years away, NGC 253 is the closest starburst galaxy to our Milky Way galaxy. However, the starburst alone cannot explain all the activity observed in the nucleus. One strong possibility is that a giant black hole lurks at the heart of it all, similar to the one that lies at the center of the Milky Way.

In late September of this year, after surveying the sky about one-and-a-half times, WISE exhausted its supply of the frozen coolant needed to chill its longest-wavelength detectors -- the 12- and 22-micron channels. The satellite is continuing to survey the sky with its two remaining detectors, focusing primarily on asteroids and comets. Read more about this survey, called the NEOWISE Post-Cryogenic mission, at:http://www.jpl.nasa.gov/news/news.cfm?release=2010-320.