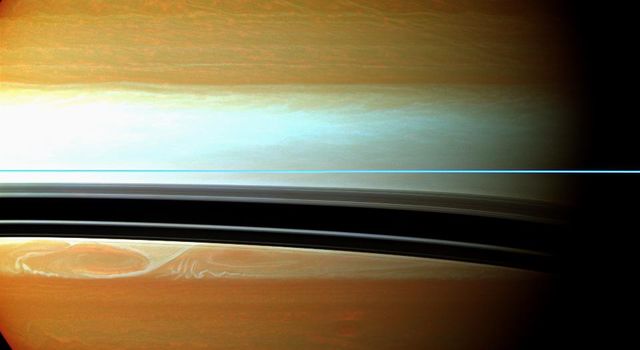 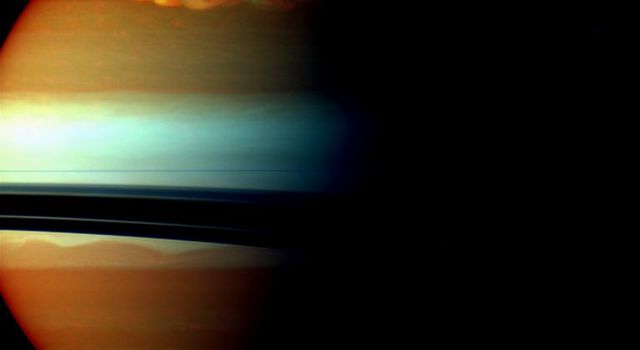 The head of the storm is beyond the horizon in this view. Saturn's atmosphere and its rings are shown here in a false color composite made from 12 images taken in near- infrared light through filters that are sensitive to varying degrees of methane absorption. Red and orange colors in this view indicate clouds that are deep in the atmosphere. Yellow and green colors, most noticeable near the top of the view, indicate intermediate clouds. White and blue indicate high clouds and haze. The rings appear as a thin horizontal line of bright blue because they are outside of the atmosphere and not affected by methane absorption.

The oval in the upper left of this image that appears slightly blue is the same hole in the deep clouds of the planet's atmosphere that can be seen near the tail in a larger false-color mosaic, PIA14905. The blue color comes from the high haze overlying the hole.

This view looks toward the northern, sunlit side of the rings from just above the ring plane. The shadow of the moon Enceladus is visible on the planet in the lower left of the image.

The images were taken on Jan. 12, 2011, over about one hour at a distance of approximately 684,000 miles (1.1 million kilometers) from Saturn and at a sun-Saturn-spacecraft, or phase, angle of 52 degrees. The images were re-projected to the same viewing geometry, so that scale in this final mosaic is 76 miles (122 kilometers) per pixel.

The Cassini-Huygens mission is a cooperative project of NASA, the European Space Agency and the Italian Space Agency. NASA's Jet Propulsion Laboratory, a division of the California Institute of Technology in Pasadena manages the mission for NASA's Science Mission Directorate, Washington. The Cassini orbiter and its two onboard cameras were designed, developed and assembled at JPL. The imaging team is based at the Space Science Institute, Boulder, Colo.