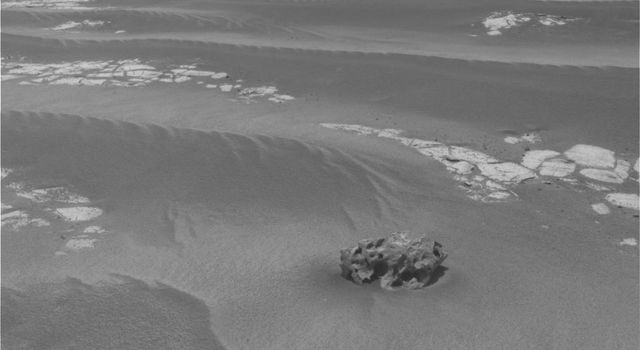 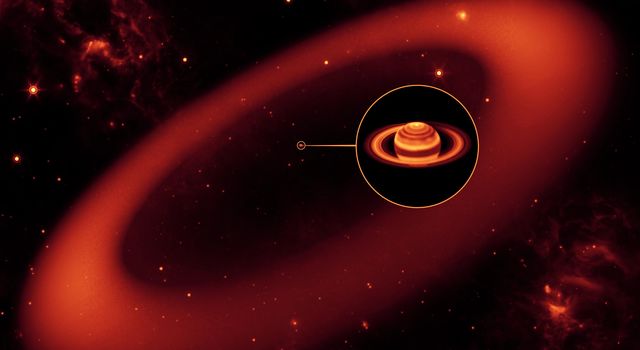 This artist's conception shows a nearly invisible ring around Saturn -- the largest of the giant planet's many rings. It was discovered by NASA's Spitzer Space Telescope. The ring is huge, and far from the gas planet and the rest of its majestic rings.

Saturn's newest halo is tilted at about 27 degrees from the main ring plane and encompasses the orbit of the moon Phoebe. Both the ring and Phoebe orbit in the opposite direction of Saturn's other rings and most of its moons, including Titan and Iapetus.

Why did it take so long to find something so big? The answer is that the ring is very tenuous, made up of a sparse collection of ice and dust particles. If you could transport yourself to the ring, you wouldn't even know you were there because the particles are so far apart. There's not a lot of sunlight out at Saturn, so this small density of particles doesn't reflect much visible light. Spitzer was able to spot the band because it sees infrared light, or heat radiation, from objects. Even though the ring material is very cold, it still gives off heat that can Spitzer can see.

The discovery offers a possible solution to the mystery of the moon Iapetus. Years after Giovanni Cassini discovered Iapetus in 1671, he correctly deduced that one side of the moon is white and the other dark in a pattern that some say resembles the yin-yang symbol or a tennis ball. Astronomers think it is possible that the newfound ring, which orbits in the opposite direction of Iapetus, is the cause of the two-faced coloring. As the ring circles around, particles could be drifting inward and splattering the icy moon on the face like bugs on a windshield.

The pictures of Saturn, Phoebe and Iapetus were taken by NASA's Cassini spacecraft. The ring is an artist's illustration.

The size of Phoebe relative to Iapetus has been enlarged to better show Phoebe. Phoebe is about 200 kilometers (124 miles) in diameter, while Iapetus is about 1,500 kilometers (932 miles) across.