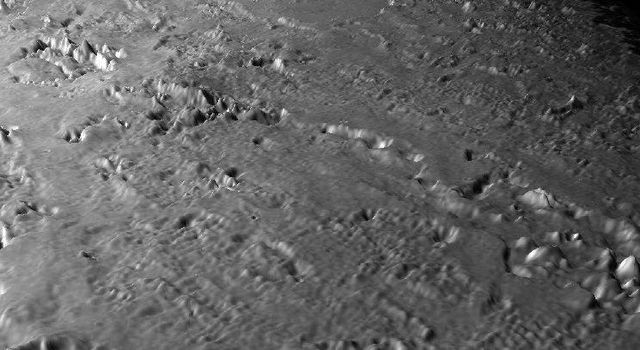 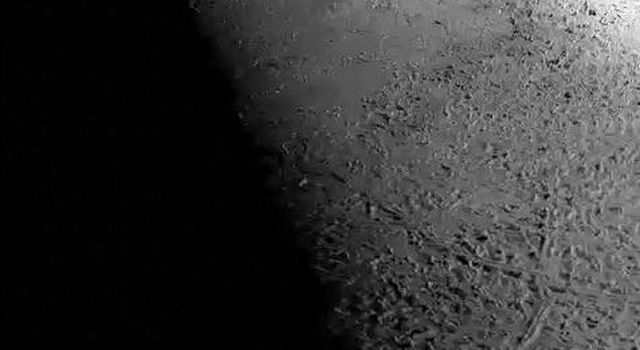 Triton, Neptune's largest moon, was the last solid object visited by the Voyager 2 spacecraft on its epic 10-year tour of the outer solar system. The rugged terrain in the foreground is Triton's infamous cantaloupe terrain, most likely formed when the icy crust of Triton underwent wholesale overturn, forming large numbers of rising blobs of ice (diapirs). The numerous irregular mounds are a few hundred meters (several hundred feet) high and a few kilometers (a few miles) across and formed when the top of the crust buckled during overturn. The large walled plains are of unknown origin, although the irregular pit in the center of the background walled plain may be volcanic in nature. These plains are approximately 152 meters (500 feet) deep and 200 to 250 kilometers (124 to 155 miles) across.

The surface of Triton is very rugged, scarred by rising blobs of ice, faults and volcanic pits and lava flows composed of water and other ices. The surface is also extremely young and sparsely cratered, and could be geologically active today. This scene is on the order of 500 kilometers (310 miles) across and is taken from a new flyover movie across the equatorial region of Triton commemorating the Voyager anniversary of that flyby. Vertical relief has been exaggerated by a factor of 25 to aid interpretation.