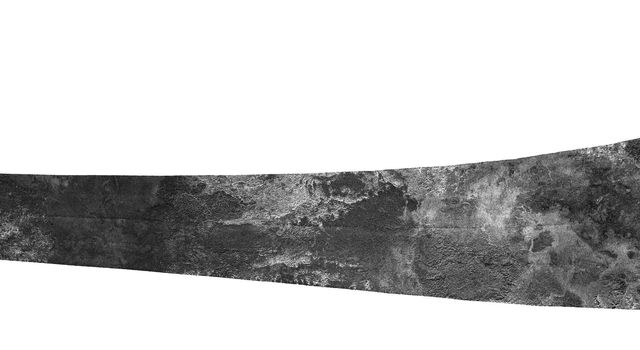 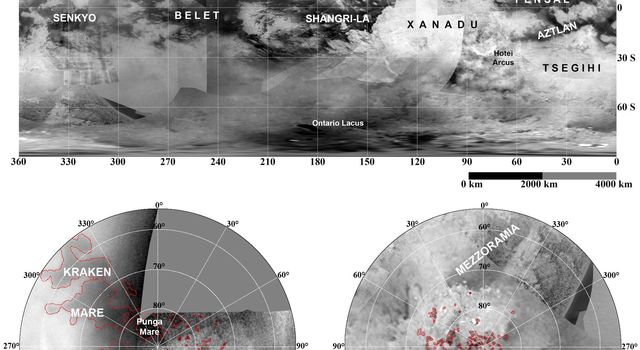 This is a portion of a Cassini radar mapper image obtained by the Cassini spacecraft on its Dec. 21, 2008, flyby of Saturn's moon Titan.

The area shown covers the southern boundary of an equatorial band where longitudinal dunes (dunes that form along the wind direction) are pervasive. Here the dunes are apparently created by winds locally coming from the west and north-west, and generally blowing toward the east. The dunes are interspersed with radar-bright features that are inferred to rise above the surrounding terrain.

In the lower part of the image there are no dunes at all, and the texture is more typical of featureless plains observed in many other areas of Titan that lack dunes. In this transition zone, the sand-sized particles that make up the dunes might not be so plentiful. In this case, insufficient sand to replenish the dunes makes them gradually disappear. Compare the nature of these dunes to those seen at the northern boundary of the dune fields observed in radar images obtained during the T3 flyby on Feb. 15, 2005 (See PIA07009).

The image is centered near 19.2 degrees south and 257.4 degrees west. It covers an area of 220 kilometers (137 miles) by 170 kilometers (106 miles). North is approximately toward the top of the image, the radar illumination is from the right, and the incidence angle is about 25 degrees. The vertical stripe across the image at its center is an artifact in this preliminary version.

For more information about the Cassini-Huygens mission visit http://www.nasa.gov/cassini and http://saturn.jpl.nasa.gov/.