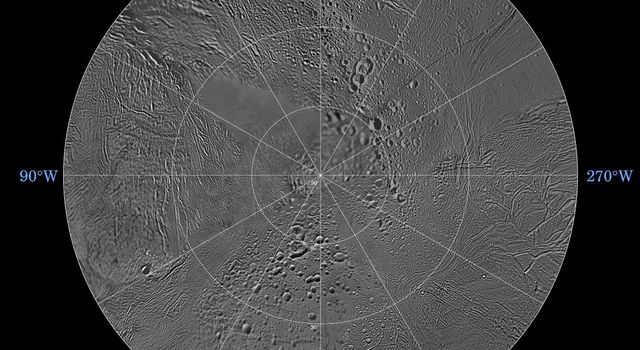 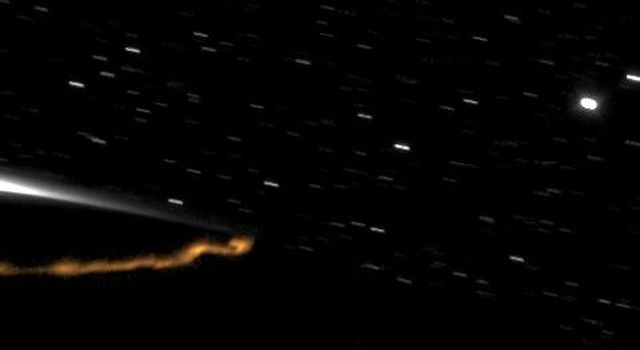 The northern and southern hemispheres of Enceladus are seen in these polar stereographic maps, mosaicked from the best-available Cassini and Voyager clear-filter images. This image shows the South Polar region and the North Polar region can be seen in PIA11678.

Each map is centered on one of the poles and surface coverage extends to the equator. Grid lines show latitude and longitude in 30-degree increments. The scale in the full-size versions of these maps is 110 meters (360 feet) per pixel.

These two maps show that the character of terrains near the north pole differs strongly from those near the south pole. Terrain near the north pole is among the most heavily cratered and oldest on the surface of Enceladus. The northern hemisphere map shows that a broad band of cratered terrain extends from the equator on the Saturn-facing side (centered on 0-degrees longitude), over the pole and to the equator on the anti-Saturn side (centered on 180-degrees longitude). Terrains near the equator and mid-latitudes on the leading (90 degrees West) and trailing (270 degrees West) sides of Enceladus are much less heavily cratered and are characterized by intense zones of fracturing and faulting.

As seen in the southern hemisphere map, the band of cratered terrain at 0 and 180 degrees longitude extends southward from the equator. However, poleward of about 55-degrees south latitude, the cratered terrain is interrupted and replaced by a conspicuously fractured circumpolar terrain that is nearly devoid of impact craters. In contrast to the very old north polar terrains, the south circumpolar terrains are among the youngest on the surface of Enceladus.

Within the south circumpolar region is a group of prominent parallel "stripes" made up of fractures that are delineated by relatively dark markings flanking the sides of each fracture.

An interesting property of the parallel fracture system is that each appears to turn back at its westernmost segment as if it has been "bent" into a hook-like curve.