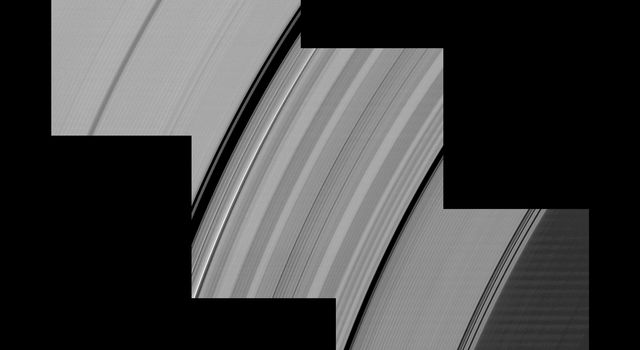 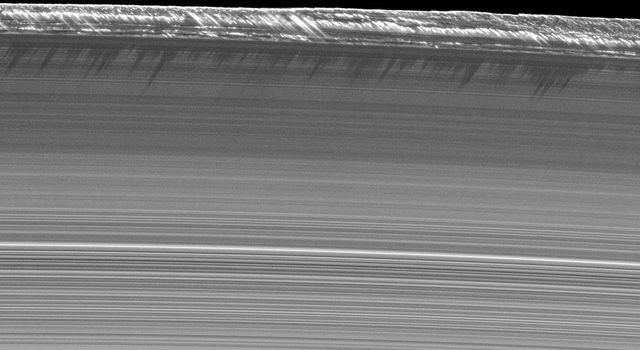 Of the countless equinoxes Saturn has seen since the birth of the solar system, this one, captured here in a mosaic of light and dark, is the first witnessed up close by an emissary from Earth ... none other than our faithful robotic explorer, Cassini.

Seen from our planet, the view of Saturn's rings during equinox is extremely foreshortened and limited. But in orbit around Saturn, Cassini had no such problems. From 20 degrees above the ring plane, Cassini's wide angle camera shot 75 exposures in succession for this mosaic showing Saturn, its rings, and a few of its moons a day and a half after exact Saturn equinox, when the sun's disk was exactly overhead at the planet's equator.

The novel illumination geometry that accompanies equinox lowers the sun's angle to the ring plane, significantly darkens the rings, and causes out-of-plane structures to look anomalously bright and to cast shadows across the rings. These scenes are possible only during the few months before and after Saturn's equinox which occurs only once in about 15 Earth years. Before and after equinox, Cassini's cameras have spotted not only the predictable shadows of some of Saturn's moons (see PIA11657), but also the shadows of newly revealed vertical structures in the rings themselves (see PIA11665).

Also at equinox, the shadows of the planet's expansive rings are compressed into a single, narrow band cast onto the planet as seen in this mosaic. (For an earlier view of the rings' wide shadows draped high on the northern hemisphere, see PIA09793.)

The images comprising the mosaic, taken over about eight hours, were extensively processed before being joined together. First, each was re-projected into the same viewing geometry and then digitally processed to make the image "joints" seamless and to remove lens flares, radially extended bright artifacts resulting from light being scattered within the camera optics.

With no enhancement, the rings would be essentially invisible in this mosaic. To improve their visibility, the dark (right) half of the rings has been brightened relative to the brighter (left) half by a factor of three, and then the whole ring system has been brightened by a factor of 20 relative to the planet. So the dark half of the rings is 60 times brighter, and the bright half 20 times brighter, than they would have appeared if the entire system, planet included, could have been captured in a single image.

This view looks toward the northern side of the rings from about 20 degrees above the ring plane.

The images were taken on Aug. 12, 2009, beginning about 1.25 days after exact equinox, using the red, green and blue spectral filters of the wide angle camera and were combined to create this natural color view. The images were obtained at a distance of approximately 847,000 kilometers (526,000 miles) from Saturn and at a Sun-Saturn-spacecraft, or phase, angle of 74 degrees. Image scale is 50 kilometers (31 miles) per pixel.