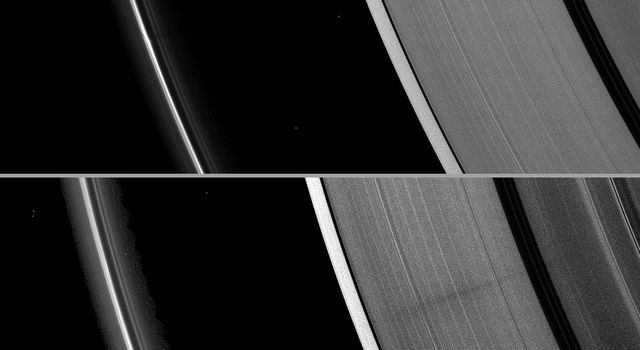 Shadow Reaches the A Ring 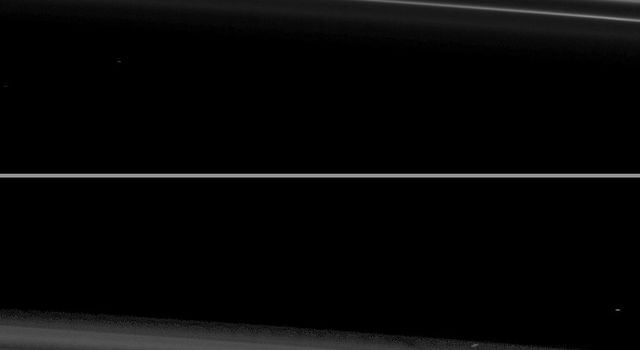 Shadows in the F Ring

The Cassini spacecraft captured this image of a small object in the outer portion of Saturn's B ring casting a shadow on the rings as Saturn approaches its August 2009 equinox.

This new moonlet, situated about 300 miles (480 kilometers), inward from the outer edge of the B ring, was found by detection of its shadow which stretches 25 miles, or 41 kilometers, across the rings. The shadow length implies the moonlet is protruding about 660 feet, or 200 meters, above the ring plane. If the moonlet is orbiting in the same plane as the ring material surrounding it, which is likely, it must be about 1,300 feet, or 400 meters, across.

This object is not attended by a propeller feature, unlike the band of moonlets discovered in Saturn's A ring earlier by Cassini (see PIA07792 and PIA06196). The A ring moonlets, which have not been directly imaged, were found because of the propeller-like narrow gaps on either side of them that they create as they orbit within the rings. The lack of a propeller feature surrounding the new moonlet is likely because the B ring is dense, and the ring material in a dense ring would be expected to fill in any gaps around the moonlet more quickly than in a less dense region like the mid-A ring. Also, it may simply be harder in the first place for a moonlet to create propeller-like gaps in a dense ring.

Straw-like patterns of clumping ring material are also visible along the edge of the outer B ring near the right of this image. See PIA09855 to learn more about these features.

This image and others like it (see PIA11656 and PIA11659) are only possible around the time of Saturn's equinox which occurs every half-Saturn-year (equivalent to about 15 Earth years). The illumination geometry that accompanies equinox lowers the sun's angle to the ring plane and causes out-of-plane structures to cast long shadows across the rings.

This view looks toward the sunlit side of the rings from about 42 degrees below the ring plane. Background stars are visible on the right of the image. They appear elongated by the camera's exposure time.

The image was taken in visible light with the Cassini spacecraft narrow-angle camera on July 26, 2009. The view was obtained at a distance of approximately 296,000 kilometers (184,000 miles) from Saturn and at a Sun-Saturn-spacecraft, or phase, angle of 120 degrees. Image scale is 1 kilometer (4,680 feet) per pixel.