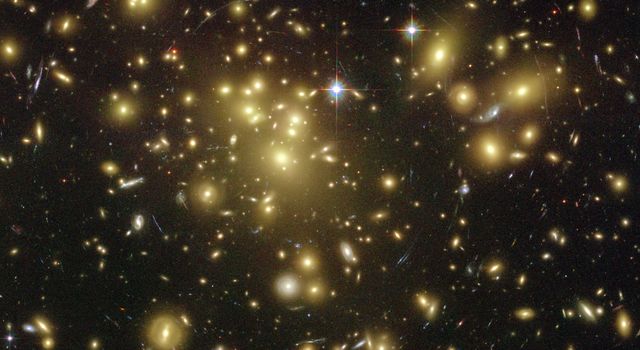 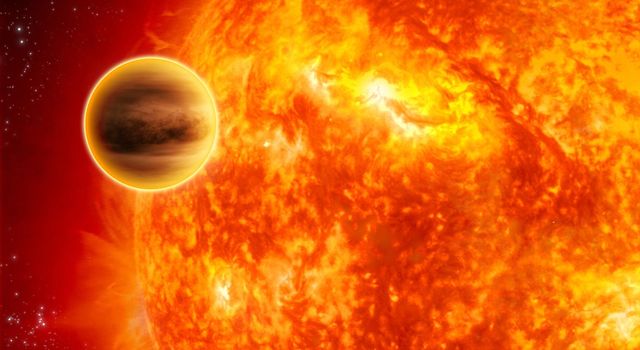 A team of astronomers led by Mark Swain of NASA's Jet Propulsion Laboratory, Pasadena, Calif., has made the first detection ever of an organic molecule in the atmosphere of a Jupiter-sized planet orbiting another star. The breakthrough, made with NASA's Hubble Space Telescope, is an important step in eventually identifying signs of life on a planet outside our solar system.

The molecule found by Hubble is methane, which under the right circumstances can play a key role in prebiotic chemistry—the chemical reactions considered necessary to form life as we know it.

This discovery proves that Hubble and upcoming space missions, such as NASA's James Webb Space Telescope, can detect organic molecules on planets around other stars by using spectroscopy, which splits light into its components to reveal the "fingerprints" of various chemicals.

"This is a crucial stepping stone to eventually characterizing prebiotic molecules on planets where life could exist," said Mark Swain of NASA's Jet Propulsion Laboratory (JPL), Pasadena, Calif., who led the team that made the discovery. Swain is lead author of a paper appearing in the March 20 issue of Nature (see Other Information in legend above).

The discovery comes after extensive observations made in May 2007 with Hubble's Near Infrared Camera and Multi-Object Spectrometer (NICMOS). It also confirms the existence of water molecules in the planet's atmosphere, a discovery made originally by NASA's Spitzer Space Telescope in 2007. "With this observation there is no question whether there is water or not—water is present," said Swain.

The planet now known to have methane and water is located 63 light-years away in the constellation Vulpecula. Called HD 189733b, the planet is so massive and so hot it is considered an unlikely host for life. HD 189733b, dubbed a "hot Jupiter," is so close to its parent star it takes just over two days to complete an orbit. These objects are the size of Jupiter but orbit closer to their stars than the tiny innermost planet Mercury in our solar system. HD 189733b's atmosphere swelters at 1,700 degrees Fahrenheit, about the same temperature as the melting point of silver.

Though the star-hugger planet is too hot for life as we know it, "this observation is proof that spectroscopy can eventually be done on a cooler and potentially habitable Earth-sized planet orbiting a dimmer red dwarf-type star," Swain said. The ultimate goal of studies like these is to identify prebiotic molecules in the atmospheres of planets in the "habitable zones" around other stars, where temperatures are right for water to remain liquid rather than freeze or evaporate away.

The astronomers were surprised to find that the planet has more methane than predicted by conventional models for "hot Jupiters." "This indicates we don't really understand exoplanet atmospheres yet," said Swain.

"These measurements are an important step to our ultimate goal of determining the conditions, such as temperature, pressure, winds, clouds, etc., and the chemistry on planets where life could exist. Infrared spectroscopy is really the key to these studies because it is best matched to detecting molecules," said Swain.

More information on the discovery and artist's concepts are online at: http://hubblesite.org/news/2008/11. Swain's co-authors on the paper include Gautam Vasisht of JPL and Giovanna Tinetti of University College, London.

The Hubble Space Telescope is a project of international cooperation between NASA and the European Space Agency and is managed by NASA's Goddard Space Flight Center in Greenbelt, Md. The Space Telescope Science Institute conducts Hubble science operations. The institute is operated for NASA by the Association of Universities for Research in Astronomy, Inc., Washington, DC. Scheduled for launch in 2013, the James Webb Space Telescope is an international collaboration between NASA, ESA, and the Canadian Space Agency (CSA). GSFC is managing the development effort. The prime contractor is Northrop Grumman Space Technologies. STScI will operate JWST after launch.

JPL manages the Spitzer Space Telescope mission for NASA's Science Mission Directorate, Washington. Science operations are conducted at the Spitzer Science Center at the California Institute of Technology, also in Pasadena. Caltech manages JPL for NASA. Previous Spitzer discoveries regarding HD 189733b from Swain and others can be read at http://www.spitzer.caltech.edu/Media/releases/ssc2007-04/release.shtml.