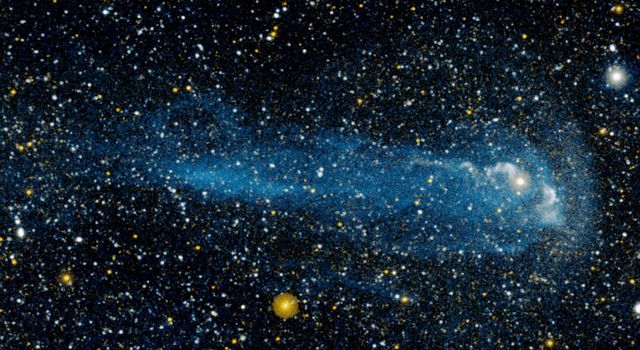 Anatomy of a Shooting Star 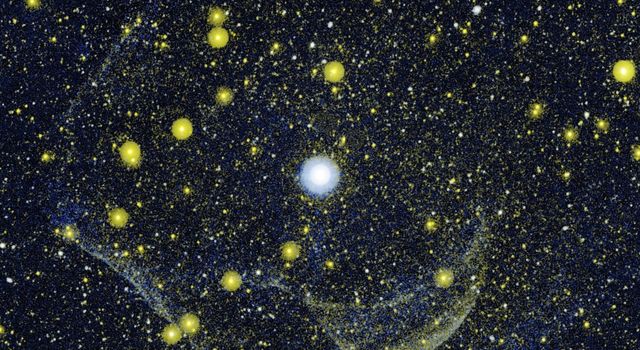 The Galaxy Evolution Explorer's ultraviolet eyes have captured a globular star cluster, called NGC 362, in our own Milky Way galaxy. In this new image, the cluster appears next to stars from a more distant neighboring galaxy, known as the Small Magellanic Cloud.

Globular clusters are densely packed bunches of old stars scattered in galaxies throughout the universe. NGC 362, located 30,000 light-years away, can be spotted as the dense collection of mostly yellow-tinted stars surrounding a large white-yellow spot toward the top-right of this image. The white spot is actually the core of the cluster, which is made up of stars so closely packed together that the Galaxy Evolution Explorer cannot see them individually.

The light blue dots surrounding the cluster core are called extreme horizontal branch stars. These stars used to be very similar to our sun and are nearing the end of their lives. They are very hot, with temperatures reaching up to about four times that of the surface of our sun (25,000 Kelvin or 45,500 degrees Fahrenheit).

A star like our sun spends most of its life fusing hydrogen atoms in its core into helium. When the star runs out of hydrogen in its core, its outer envelope will expand. The star then becomes a red giant, which burns hydrogen in a shell surrounding its inner core. Throughout its life as a red giant, the star loses a lot of mass, then begins to burn helium at its core. Some stars will have lost so much mass at the end of this process, up to 85 percent of their envelopes, that most of the envelope is gone. What is left is a very hot ultraviolet-bright core, or extreme horizontal branch star.

Blue dots scattered throughout the image are hot, young stars in the Small Magellanic Cloud, a satellite galaxy of the Milky Way located approximately 200,000 light-years away. The stars in this galaxy are much brighter intrinsically than extreme horizontal branch stars, but they appear just as bright because they are farther away. The blue stars in the Small Magellanic Cloud are only about a few tens of millions of years old, much younger than the approximately 10-million-year-old stars in NGC 362.

Because NGC 362 sits on the northern edge of the Small Magellanic Cloud galaxy, the blue stars are denser toward the south, or bottom, of the image.

Some of the yellow spots in this image are stars in the Milky Way galaxy that are along this line of sight. Astronomers believe that some of the other spots, particularly those closer to NGC 362, might actually be a relatively ultraviolet-dim family of stars called "blue stragglers." These stars are formed from collisions or close encounters between two closely orbiting stars in a globular cluster.